One of the best things about getting drunk is getting drunk food. Drunk food is a complete meal you can eat with your hands that fills you up and is served quickly. Certain foods taste better when you’re inebriated. Pizza is always good, but it’s so much better when you’re drunk. A drunk burrito in between bars keeps your night going. Stumbling across a street vendor selling bacon-wrapped hot dogs will make you believe that God is real and wants us to be happy. Drunk food provides you with the much needed fuel to keep on drinking. It makes the party last longer. You know you had a good night when you find an empty pizza box on the counter when you wake up the next morning and no recollection of getting it. I’m not promoting binge drinking, I’m promoting eating food when you’re binge drinking. There’s a slight difference I’m sure. 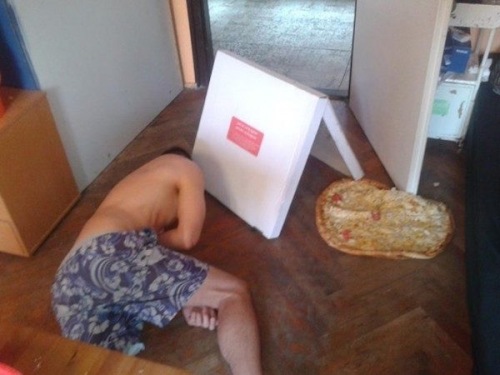 Eating Pizza with a Knife and Fork

I will eat pizza with my bare hands ninety-nine times out of a hundred. More than that even. I will eat pizza with my hands nine hundred and ninety-nine times out of a thousand. But every once in a while I will use cutlery to enjoy the culinary treat. Eating pizza with a knife and fork makes you feel classy instantly. Suddenly you’re not eating pizza, you’re eating pizza pie. It becomes a delicacy. When you take the time to cut each bite, you savor each bite. And people will look at you and respect you instantly. You could have ripped into your pizza like a commoner but you ate it like a civilized man instead. That’s worth something. Not sure what, but it’s gotta be something.
Critically Rated at 10/17

Tagged as eating pizza with a knife and fork, fork, knife, pizza

There are a few ways to cut a pizza. Some people opt for a pizza cutter, a device made for the sole purpose of cutting pizza. Some people us a sharp knife (sharp knives are much better than dull ones). My grandma was a rebel and didn’t play by the rules. She would cut pizza with scissors. It worked and it worked well. She could cut a pizza faster and more precisely than any other grandma in the neighborhood. She never got any recognition for her contributions to the pizza cutting world, but I’m fighting to preserve her culinary breakthrough. I want people to know that cutting pizza with scissors is not only an option, it’s a viable one. Try it the next time you cook up DiGiorno. It might change your life.

Finding Forgotten Food in the Freezer

I came home kind of late the other night and I was kind of tipsy. I needed food. I didn’t think that I had any. I checked the freezer just to be sure. I found a half-empty box of Bagel Bites. I was beyond stoked. I let out a cheer and did a victory dance. Finding forgotten food in the freezer is like hitting the late night munchie jackpot. A minute earlier and my stomach was growling and I was desperate for food. A minute later and I suddenly had five little bagel pizzas to scarf down. I popped that shit in the oven, because fuck the microwave. If you’re going to eat Bagel Bites, you have to do it right. Microwaving them leaves them soggy and bland. Baking them in the oven makes them crispy and delicious. They go great with a cold soda or a can of PBR. I didn’t mean for this post to turn into a commercial for Bagel Bites. These things write themselves, I just go along with it. There’s no denying that when pizza is on a bagel, you can eat pizza anytime.

Ordering a Pizza From Domino’s Online

It’s a rainy day and I’m feeling lazy so I felt like ordering a pizza. I wanted something cheap and fast, so I chose Domino’s. I haven’t had their pizza in a while and I felt like they deserved another shot. I went to their website and saw that they’ve elaborated their online ordering. It makes it really easy to build and customize your pizza. There’s a virtual picture of your pizza that displays your toppings so you can see what the pizza will actually look like. You can see if pepperoni and bacon looks better than sausage and mushrooms. As soon as you place the order, you can follow the action with the Domino’s Tracker. It tells you when the order was placed, when they started prepping it (Antonio started making my order at 3:39 pm), when they started baking it (Antonio put it in the oven at 3:49 pm), when they perform the quality check, and when they start to deliver it. Right now it’s only 3:53 pm so I don’t know if the pizza tastes good or not, but I’m pretty impressed with ordering a pizza from Domino’s online. I will definitely do this again.

Pizza then Twists then Back to Pizza

You’re chilling with some friends, it’s getting near dinnertime, and you all decide to order a pizza with some garlic twists. Twists are good, pizza is great, and you’re not sure which one to eat first. Let me give you a hint: start with a slice or two of pizza, then grab a twist, then go back to pizza. If you’re still hungry after that, then you can grab another twist. It’s more important to fill up on pizza first. You got the twists to go with the pizza; you didn’t get the pizza to go with the twists. Pizza is the main event, twists are just the accessory. So remember: it’s pizza then twists then back to pizza. And it all goes better with beer.

Tagged as pizza, pizza then twists then back to pizza, twist, twists

Ordering a Pizza While Drunk

I went to a going-away party the other night and proceeded to get shitfaced with about fifty friends. We were doing shots, drinking cocktails, chugging down beers, and drunk people are known to get hungry. We decided to order a couple of pizzas and that turned into a process. First we had to decide on a place. Then we had to figure out how many people are eating so we would know how many pies to get. Then we had to figure out what toppings you want, and that part took forever because some people are vegetarians and some people are opposed to pineapple and some people can’t eat cheese. It turned into a debate over whether or not to get a meat combo or a veggie combo or a plain cheese pizza, and everyone was drunk so they all have an opinion, and everyone’s opinion was loud. We finally decided on the three pizzas that we would get, and then another argument started over who would call and place the order. Everyone had a lame reason or an excuse over why they couldn’t be the one to call. Eventually I gave in and I called. I didn’t even bother leaving the room full of rowdy drunks, so I had to yell so that the lady could hear me and kept having to ask the lady to repeat herself. After five minutes I finally got the order in, but then we had to collect the money, and that was the biggest hassle of all. Some people had cash, but only big bills that had to be broken. Some people only had cards. Some people had to borrow money from other people. Everyone wanted pizza and that meant some people weren’t going to eat any. Ordering a pizza while drunk is a chore, but eating a pizza while drunk makes it all worthwhile.

Hot Pockets Pepperoni Pizza is the frozen microwavable pizza pocket that you grew up with. It’s glob of melted cheese, grease, and meat with a terrible tasting dough holding it all together. The end result is a turnover that tastes somewhat similar to a slice of pizza. The filling will be hot enough to burn the roof of your mouth with one bite and will be ice cold with the next. There is no such thing as a perfectly cooked Hot Pocket. It simply can’t be done. Or so I thought. I was looking at my Hot Pocket wrapper and I noticed that there are instructions for cooking the Hot Pocket in the oven, so I tried baking it instead of nuking it. It takes about 28 minutes to cook in the oven (not including preheating) and that’s a ridiculously long time to wait for a fucking Hot Pocket… but the filling was consistently hot throughout, the crust was nice and crunchy, it was as close to perfection as any Hot Pocket could be. But there’s not point using the oven to cook microwavable food. It defeats the purpose of buying microwavable food.

Devouring a slice of cold pizza is the best way to declare to the world that you just don’t give a fuck. Pizza is delicious no matter what. It’s pretty hard to fuck up a slice. You pretty much have to burn your DiGiorno or drop it on the ground to make it inedible. Pizza is preferably served hot or at least lukewarm, but sometimes a slice of cold pizza hits the spot. Greasy, cheesy bread really can be served at any temperature and be a delicacy. Cold pizza is a great example of how versatile the Italian pie can be. Plus any meat topping is a bonus. Extra points for sausage. 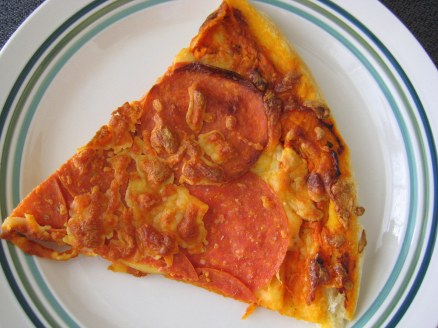 It’s late at night, the bars are closing and your stomach is growling. It’s time for a slice of pizza. You don’t want a whole pie, you just need a slice and you need it now. A slice of pizza is a godsend when you’re drunk and starving. You’ll stumble into a small pizza shop and see a bunch of pizzas with an assortment of toppings bathing under the warmth of a half dozen heat lamps. Now you have choices…. A meat combo or a veggie combo or pepperoni with mushrooms? Decisions, decisions. You order a slice, they pop it in the oven to reanimate it, you add some pizza peppers and Parmesan cheese, then you take a bite and you’re in heaven. A slice of pizza is the perfect way to wrap up a night on the town.

DiGiorno is one of the pioneers of frozen pizzas. They were one of the first frozen pizzas with a rising crust and a fresh-baked taste. A lot of the inferior brands are bland and taste like cardboard. They have a lot of different types of pizza like 4 Cheese, Pepperoni, Supreme, Thin Crust, and a few others. They also make different sized pies; some big enough for a few people and some are personal pies. DiGiorno has a solid ad campaign. Everyone knows that it’s not delivery. It’s DiGiorno.

I just don’t see the point of ordering a cheese pizza. If you order a pizza, you should get a topping. Pizza comes with cheese on it already. It’s so boring too. At least get peperoni or something. If you’re a vegetarian, get a veggie combo or add mushrooms or something. Ordering a cheese pizza is like ordering a hot fudge sundae without hot fudge, nuts, or a cherry. It’s just vanilla ice cream and it’s not worth it. Cheese is good, they know that, that’s why they already included it on your pizza. Do you wanna suck on a popsicle or an ice cube? Put something else on it, you cheap tasteless bastard.