Black Panther is a 2018 Marvel superhero film based on the comic book character. It’s more than a movie, at this point it is a bona fide movement. It’s the first major blockbuster to celebrate black culture. It was directed by a black guy, written by black people, with a majority black cast and that’s a rare feat because Hollywood loves whitewashing. It’s not the best Marvel movie, but you could argue that it is the most important one.

Ryan Coogler (known for Fruitvale Station and Creed) will join Spike Lee and John Singleton as one of the most successful African-American directors in cinematic history. He deserves it. He turned a relatively obscure comic book character into movie star. Not only is Black Panther about powerful black men, it’s also about powerful black women. That means that black kids have powerful role models to look up to. White people take that for granted. The white guy is almost always the hero of the story. Black people are depicted as sidekicks, villains, gangsters, and comic relief. It’s a breath of fresh air to see something different.

Chadwick Boseman stars as T’Challa aka the Black Panther. Michael B. Jordan plays Killmonger, the sympathetic villain. They are kind of like Martin Luther King, Jr. and Malcolm X. They recognize a major injustice and deal with it in different ways which leads to an inevitable conflict. There you have the most simplistic deconstruction of the plot. Throw in a few awesome action sequences and some philosophical questions about race and responsibility and you have the formula for a great movie. Go see it in theaters. Pay for your ticket. Be a part of it. 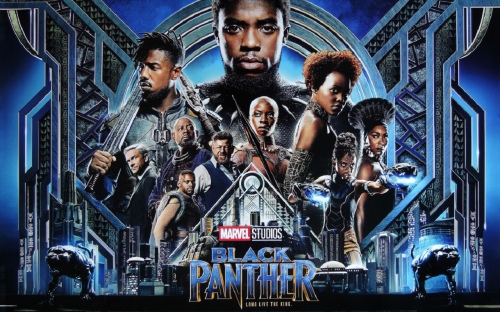 We are in the midst of the PyeongChang 2018 Winter Olympics and curling is once again taking the world by storm. Curling is like shuffleboard on ice. It’s one of the few sports that seems accessible to everyone. I’m thirty-two years old and know that I can never win a medal with a snowboard, skis, or ice skates, but I have a chance to compete with a broom in my hand.

Instead of getting drunk and going bowling, I want to get a group together to drink and go curling. It seems like a leisurely activity with plenty of time to chat and socialize without being overly physical. Plus you can set your beer down on the ice between turns and keep it cold. You can’t do that while bowling.

Everything Sucks! (TV Show, Not Life in General)

Everything Sucks! is the latest Netflix show that I binge watched. It’s a coming of age dramady set in 1996, so expect plenty of tubular references to ’90s pop culture. The show follows Luke O’Neil (played by Jahi Di’Allo Winston) as he begins his freshman year at Boring High School in Boring, Oregon. That’s a real town but a fictional school if you were wondering. Luke meets Kate Messner (played by Peyton Kennedy), the angsty daughter of the principal and develops a crush on her. Throw in supporting characters from the A/V Club and the Drama Club and you have the premise for a solid show.

Everything Sucks! starts out seeming like your stereotypical teenage soap opera but they take a few chances that I wasn’t expecting. This isn’t about boy meets girl, boy gets girl. There’s more to it than that. Shit doesn’t go to plan, and the main characters have to deal with things they weren’t expecting. All of this set to a sweet soundtrack of nostalgic nineties hits. It’s not as universal as The Wonder Years nor as honest as Freaks and Geeks, but it’s worth watching if you experienced the nineties and want to reminisce a bit. It’s not in my top twenty-five shows of all time, but it’s good enough to recommend.

I’m not a politician. I don’t pretend to be. But it’s quite clear that this country has a problem with guns. The Valentine’s Day school shooting in Florida is the latest massacre that left innocent people dead at the hands of a madman. It won’t be the last. I guarantee you that there will be another major mass shooting before the month is over. How many more Columbines and Sandy Hooks do we have to endure before we wake the fuck up and do something?

Americans love guns. They are a huge part of our history. They are huge part of our entertainment. The top five movies of all time are Avatar, Titanic, Star Wars: The Force Awakens, Jurassic World, and Marvel’s The Avengers. Pretty diverse movies ranging from fantastic space operas, historical love epics, to dinosaurs and superhero collaborations. They all feature guns. We are encouraged to own guns. It’s ingrained in us thanks to mass media and the power of the NRA and a corrupt government that always turns a blind eye.

I’ve shot guns before. I went to a shooting range in Alaska and shot a few handguns and an AR-15. It was fun. I get why people like it. But guns kill people. That’s what they were designed to do, especially the AR-15. Anyone remember lawn darts? That was a game where people threw foot long darts with metal tips at a target. It was a fun childhood game, innocent to the core. Over a ten year period 6,700 people in the USA were injured by lawn darts. 75% of these injuries were to children, three of whom died. Things that kill children are bad, so the government wisely stepped in and banned the sale of lawn darts. Lawn darts killed three kids in ten years and that was enough to make them illegal. Seventeen people died yesterday in Parkland, Florida. Something is clearly wrong here. 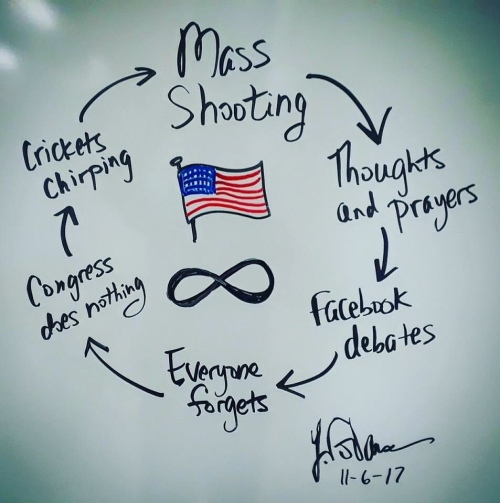 I was at my dive bar a week ago and the bartender was doing a crossword puzzle behind the bar (that’s how you know it’s a real dive bar). There were three other patrons besides me and we were only sipping beers so he had plenty of time to work on it. He would occasionally read out a clue and ask for help. After a little while he set it down and I asked to see it. He had about half of it filled out, not too shabby. I picked up a pen, jotted in a few answers, and put it down. The lady sitting next to me grabbed it next. She put in a few words and passed it on to the guy next to her.

At this point it was a group crossword, a collaborative effort to fill it all out and complete it. Each of us had mini Eureka! moments and contributed in some way. We came close to perfection. We only had a few answers missing by the time I left. I can only hope that the bartender took it home and finished it. A crossword is like solitaire. You’re supposed to play it by yourself, but it becomes a group effort when you do it in public. 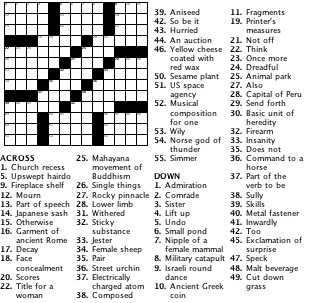 I know a lady who narrates whatever she is doing out loud. If she walks into a room to check her phone she will actually say, “I’m walking in here to check my phone.” If she’s brushing her hair she’s explaining why she has to brush it, how many tangles she has, and how her hair gets frizzy with the slightest bit of moisture. Most of the time she’s talking to herself but every now and then she will look at someone else for validation. She’s a self narrator. I have no other way to describe it. Narrating your own life isn’t a habit I would recommend falling into. It annoys other people and makes you look crazy. Morgan Freeman is the only person that can successfully get away with it. 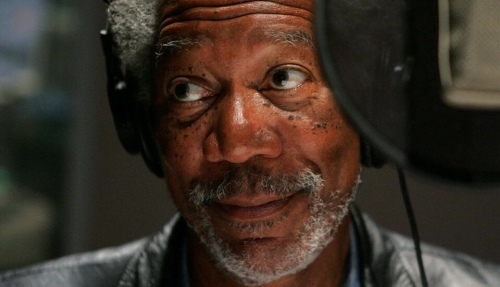 D.B. Cooper is the alias of an unidentified man who successfully hijacked a plane on November 24, 1971. ”Twas the night before Thanksgiving and D.B. Cooper had a meticulous plan. He bought a plane ticket with cash and shortly after takeoff he told a flight attendant that he had a bomb in his briefcase. He demanded four parachutes and two hundred thousand dollars in cash. His demands were met, he released some hostages, and arranged for the plane to go to Mexico. At some point during the flight he jumped out of the plane with the money and two parachutes, never to be seen again. It was and still remains the only unsolved case of air piracy in commercial aviation history.

Whether or not he survived is unknown. But this was a man with a plan and he’s become a legend. The FBI investigated the case for more than forty-five years before giving up. He inspired a slew of copycats, none of which were successful. It’s a fascinating story and Hollywood has been slacking on telling his tale. Someone needs to make a movie about him. Maybe Kevin Spacey can play him. His schedule is pretty open these days.