You might have noticed the surge of oddly flavored potato chips hitting the market the past year or so. Sriracha. Chicken & Waffles. Wasabi Ginger. And Cappuccino. Yes, Cappuccino. Potato chips that taste like cappuccino. I saw them and I had to buy them. Because they are fucking potato chips that taste like cappuccino. I bought the bag, took it home, opened it up, and took a whiff. It smells like coffee. Salty coffee with a hint of stale milk. I was slightly worried, but I still picked up a chip. I studied it before I popped it into my mouth. It looked like a chip covered with instant coffee powder. Then I popped it into my mouth. It tasted like a chip covered with instant coffee powder. None of the flavors really mesh well, and they all cancel each other out. It’s a crunchy texture with a bland sweetness and a hint of coffee. I wouldn’t say that it’s salty but you can still taste salt, it’s just lost in the flavor confusion. There’s a touch of cinnamon, but it’s barely detectable. Lay’s Cappuccino Potato Chips look a lot more intimidating than they really are. They aren’t good, they aren’t bad. They are more of a novelty than a snack.

The Sriracha hot sauce phenomenon continues with the introduction of Kettle Brand Sriracha Potato Chips. Kettle Chips are my favorite potato chips and Sriracha is my go-to hot sauce, and this seems like a winning combination. When you open the bag, you’re instantly hit with an intense pepper aroma. It’s like a mild spraying of mace in your face. You can tell that it’s going to be hot right away. I took a chip, popped it in my mouth, chewed and swallowed it. It wasn’t that spicy at first, but Sriracha is deceptive and that’s why I love it. Just when you think that you’re in the clear, it creeps up on you. Your tongue starts to tingle and the fire starts to burn. Your eyes might water and you might start to sweat if you’re not used to spicy foods. And that’s just the first chip. If you’re an amateur, I would advise not shoveling a handful of chips in your mouth because you’ll regret it. The Sriracha flavor lingers and gets hotter and hotter well after the chip is gone. It’s like shotgunning beers. You think that you can handle it and then it suddenly hits you and you realize that you made a big mistake. These are damn good chips. I just wasn’t prepared for them and now I’m sweating like a motherfucker. Make sure you have something to drink when you eat them and that there’s a fire extinguisher near by.

Double dipping is a cardinal sin and should be treated as such. You’ll see somebody grab a chip, dip it in the salsa, and then take a bite. Then you’ll see them dip the chip again with the part that was in their mouth. They are essentially spitting into the salsa even though they deny it. Double dipping is not condoned, but there is a right way to do it. After your initial bite, you simply have to turn the chip 180 degrees and use the sanitary part to get more dip. Then you can dip your half-chewed chip without contaminating the rest of the dip. There you go, you get two dips with one chip without tainting the dip for everyone else. There’s really no excuse for double dipping. It’s gross, it’s rude, it’s lazy, and it’s beyond inconsiderate. I don’t want to taste your spit; I just want to enjoy the guacamole. You shouldn’t share with other people if you don’t have any etiquette. 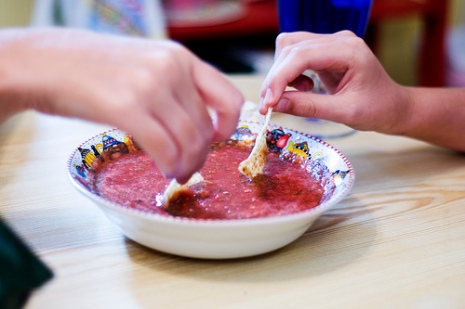 Ruffles chips are good, but they are boring. They realized that they weren’t extreme enough, so the suits got together and created Ruffles Ultimate, and they came up with a few hardcore flavors for your hardcore hunger. And Kickin’ Jalapeño Ranch is one of those hardcore flavors. It’s has a cool, creamy ranch taste, and the jalapeño flavor gives it a kick (maybe that’s why it’s kickin’). The jalapeño sneaks up on you. You won’t think it’s that spicy until it hits you a few chips in. It tastes pretty good by itself, you don’t need any dip. I don’t think they are strong enough to handle dip. They look sturdy but they break easily.  They have a nice crunch to them, but they leave residue on your fingers. They are worth trying, but I don’t think it’s going to dominate the market any time soon.

There are a lot of different brands of snack food out there and Jensen’s Orchard Spinach and Artichoke Chips are on the healthier side of the spectrum. These chips are all natural with no trans fat, MSG, or hydrogenated oils and they are made with real spinach and artichokes. They don’t taste anything like a regular potato chip. You can really taste the spinach and artichoke and there are hints of garlic. You can eat them out of a bag or with a dip. If you eat them with a dip you should use a spinach and artichoke dip and go all out. They’re a bit on an acquired taste but I finished the bag. I don’t know if I’d buy them again, maybe if they were on sale.

It’s Super Bowl Sunday, America’s favorite pseudo-holiday. Football is the religion of choice for a lot of people. Super Bowl Sunday is like Christmas, New Year’s and Flag Day all rolled into one. The Baltimore Ravens face off against the San Francisco 49ers in New Orleans. Oh, and in case you haven’t heard, the two head coaches are brothers so everyone is talking about the Harbaugh Bowl (or Harbowl if you like puns). Some people are talking about Ray Lewis playing his last game. Everyone else is Kaepernicking.

The weird thing about the Super Bowl is that nobody is allowed to say it. It’s always “The Big Game” or some variant. It’s dumb; everyone knows that “The Big Game” is the Super Bowl. I don’t know why the NFL is so opposed to free advertising. I know that the NFL is a business, but they are stingy as fuck. They would charge you for the ice in your soda if they were a restaurant.

The Super Bowl boosts the economy in a lot of ways. Beer and alcohol sales skyrocket. Chips, dip, salsa, wings, cheese plates, and pork rinds fly off the shelves. Big screen TVs and surround sound systems get sold out. And I’m pretty sure that adult diaper sales also increase because you can’t go to the bathroom. You can’t miss the game and you can’t miss the commercials and all that beer has to go somewhere.

Enjoy the game, enjoy the day, and enjoy the people you’re spending it with. Get drunk, eat food, make bets, and have fun. And no matter the outcome, respect your city. It’s a game, not a reason to go riot.

Chips are good. Cheese is good. Kettle Brand potato chips with a jalapeño jack flavor is even better. This is a limited batch commemorating thirty years in the potato chip business. It’s a delicious milestone. The chips aren’t Krinkle Cut like some of the other Kettle chips, they look kind of like Lay’s. They taste similar to a sour cream & onion flavor, but they are spicier. In a blind taste test there’s no way you could label this as a jalapeño jack flavor without being told that it was jalapeño jack. Try them out, you might like them. They won’t be available for long so grab them while you can.

You were a little tipsy last night and you wake up to find a bag of chips that you opened up and left on the counter all night long. Curious, you stick your hand in the bag and grab a chip. You pop it in your mouth and start to chew, realizing after a few bites that the bag is now filled with stale chips. Chips are dried and processed and loaded with preservatives. How does a few hours of exposure make them stale? Those food scientists are slacking. Stale chips are uncalled for and inexcusable. But I can’t stop eating them.

Girls get together and go to brunch. Guys get together and have a poker night. Mimosas and cantaloupe are nice and all, but I prefer beer and gambling. Someone volunteers their house, a few guys bring poker sets, and everyone else brings booze and snacks. You decide on a game (you can’t go wrong with Texas hold’em), everyone puts in their cash and gets a stack of chips, and the next couple of hours are spent sitting around the table laughing, joking and occasionally crying. You feel great when you bluff your way to a big pot, you feel agony when you get a bad beat on the river, and you try to survive getting knocked out long enough to at least win your money back. Poker is kind of like Mario Kart: you can do everything right, be winning the whole time, and still lose when a random blue shell takes you out. That’s why I love it and that’s why I hate it. But poker nights are always fun.

Bugles are a cone shaped corn snack. They are crispy like chips, but are more fun and you can put them on your fingertips and they look like gnome hats. You might have to use your imagination. They don’t fit quite as well as when they did when I was a kid though. Finger foods are fun. They come in a few different flavors but Original is always the best choice. Bugles are good, but there’s no way you can eat them everyday.

Lay’s classic potato chips get a slight flavor boost. It is reminiscent of a margherita pizza. It’s like they dehydrated a pizza sauce or Ragu or something and added that to chips. Try them, you might like them. I’ll stick to normal flavors like sea salt and salt & pepper and salt & vinegar. American flavors.

This is pretty good junk food. The salsa verde flavor is nice and a medium amount of spicy. It’s a good idea to have a beer or soda with it to wash it down. You’re going to have greasy chip fingers when you’re done. Doritos are definitely jean stainers.

These are not chips, they are crisps, and don’t you forget it. What’s the difference? Well, chips are mostly just cut up potatoes that are baked or fried or whatever. Crisps are potatoes that are processed and genetically modified into perfectly uniformed, cloned edible devices stacked upon each other in a tennis ball can. And they are delicious.

Good crunch, nice salty flavor and no greasy residue. I am an American, and I love fake food.