A Walk in the Park

I am lucky enough to live next to Golden Gate Park in San Francisco, one of the best parks in the world. It’s bigger than NYC’s Central Park. That means it is better. Popularity and politics aside, if you are lucky enough to live close to a park too, I suggest that you take some time and enjoy a walk in the park. You’ll experience fresh air and sunshine. You’ll see birds and squirrels and trees and flowers and be reminded that Nature is a real thing and not just something you see on the Discovery Channel.

It’s good to be out in open space, standing on grass and dirt rather than concrete and trash. Sometimes you forget about nature when you live in a city. A walk in the park makes you remember that your roots are in caves, not in cubicles. And going outside is free entertainment. Appreciate it and take advantage of it.

Mankind created the wheel and then we created roads. And then we ran over animals and started calling it roadkill. Most of the time the roadkill in question is a creature like a skunk or raccoon, sometimes a deer, and occasionally a dog or a cat. They are mostly animals that walk to get around and they have no choice but to cross over highways, roads and streets.

So if you see a dead bird roadkill, that bird either was trying to die or deserved to die. That fucker can fly over the road, safely out of harm’s way. It’s a fucking bird. It should be in the sky, not on the fucking street anyway.

I know there are flightless birds that don’t have a choice, but I think they are just being lazy. They have wings, I can see them right there. So flap them and fly, you stupid penguin.

Mama ducks parading their ducklings into traffic doesn’t impress me either. Ducks are waterfowl. They should be in the water, not playing in the street. My mom taught me that what I was a kid. The mother duck isn’t setting her kids up for success pulling stunts like that.

A bird that ends up as roadkill is a failure. It literally failed at life and got hit by a car and died. I don’t feel sorry for dead bird roadkill and neither should you. You can’t reward stupidity.

Cats are the most popular pets in the USA and in the UK. More popular than dogs, more popular than fish, and way more popular than deranged chimpanzees that go on face-biting rampages. Dogs are loyal, loving, and obvious. Cats are shady, manipulative, and conniving. You can’t trust them, you can’t tell what they are thinking, and it seems like they are always analyzing the best way to kill you.

Cats are killing machines. That’s not a setup for a joke. That’s a cold hard fact. Cats are compulsive killers. They are designed to stalk, hunt, and eliminate. Their teeth are like daggers; their claws are super sharp, perfect for slashing and doubling as grappling hooks. Their paws are designed for killing and climbing, while the docile dog has paws made for digging and running long distances. Cats can hear higher frequencies than dogs (almost as good as bats), and their vision is superior to ours in a lot of ways. Not only do they see 6x better in darkness than us, but their eyes also act as magnifying lenses. They practically have superpowers.

Dogs wear their hearts on their sleeve, while cats have a hidden agenda.  Most dog breeds were bred for laborious reasons; we have a working relationship with them. They rely on us, they want to serve us, and they want to please us… Cats use us for free food. They don’t need us, they just put up with us. Some people have housecats, and make sure Mr. Buttons is confined to the house at all times. That is not a real cat. Real cats go outside at night and wreak havoc on the neighborhood. They stalk, hunt, and cause chaos, just for shits and giggles, and then they come home for a gourmet canned delicacy.

You might notice that cats like to rub their cheeks and face on you as they seek attention. You might mistake that as a sign of affection. They are really marking you with their scent. Rubbing against you is the feline equivalent of a dog peeing on your face to establish his territory.

City cats are like gangs. They have clear territories and social hierarchies. A tomcat (an unneutered and all natural) is at the top of the totem pole. A successful tomcat’s turf can be up to a square mile, ideally encompassing as many females cats in heat as possible. Their only rivals are other tomcats. Neutered cats can’t breed and consequently aren’t a threat. So if you want your cat to be tough, let him keep his balls.

Most cats are selfish bitches with a thirst for blood and murder. I might be misquoting the Discovery Channel, but cats are evil. There are a few good cats but they are the exception to the rule. I had five family cats growing up. Only one is worth talking about. His name was Roofus, my uncle found him on the street when he was a kitten and we adopted him. The tip of his tail was missing and someone tried to glue it back on. It didn’t work. Roofus was an outdoor cat, and each night we would set him loose on the neighborhood. We never knew what he was up to most of the time, but we were able to glimpse the occasional catfight. Sometime he would show up with mementos of his deeds like dead birds, rodents, and even a bat one time. One day he came home with a missing fang. I often wonder what unlucky animal ended up with that embedded in its skull. 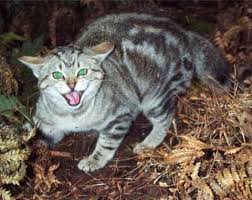 I’m not trying to reminisce here. I’m trying to make a point. Roofus was a badass, but he was still a cat. There’s no denying that cats have personalities, but they are too reclusive. They are reserved and always seem to have their guard up. Way too enigmatic. I can’t get behind that. Cats might be the most popular pets in America but that doesn’t mean anything. Jersey Shore is really popular too. And don’t get me started on Twilight.

There are two types of people in the world. There are dog people and there are cat people. You have the occasional schmuck who prefers birds or fish, but they are most likely serial killers and we don’t talk about them. Fish lovers are creepy. At least I can respect cat people. Dogs are better than cats though, no doubt about it.

Let’s start at the beginning. Their domestication marked the arrival of our civilization. We used them for protection, for hunting and tracking game, sometimes even for transportation, and we always cherished their companionship. Whole tribes and cultures depended on them for survival. Dogs are man’s best friend for a reason.

We used to have a working relationship with dogs. We developed breeds to do our dirty work. For example, we made wiener dogs to kill badgers, and we made border collies to help herd sheep and alert us if Timmy fell down the well. We don’t have such a strenuous lifestyle anymore, so most us just have dogs as pets now.

Dogs are the best pets for a few reasons. When you want to pet your dog, you pet your dog. If you don’t want to pet him, you can just push him away. Cats are the exact opposite. They want to be petted when you don’t want to pet them, and when you want to pet them they scratch you. Fuckers. Dogs are better at playing. Cats chase a laser pointer and paw at a dangling string. Dogs have rubber toys shaped like pork chops and rolled-up newspapers and rope toys to chew on. They also play-fight with each other. They’ll bite, nip, jump, roll, and occasionally mount each other. They run after balls at top speed, they snatch Frisbees out of the air, and they swim after thrown sticks. Go to a dog park and watch the action. That’s entertainment.

There are an endless variety of breeds. You can get a tiny Chihuahua or a gargantuan Great Dane. There’s hundreds of purebreds and thousands more mutts. If you want a guard dog, a work dog, a sled dog, a lap dog, a service dog, or a hunting dog, there’s a dog out there for you.

Dogs are great animals. If you’re lucky enough to come across one, you should introduce yourself and shake his paw. Scratch behind his ears. Tell him he’s a good boy in baby talk. Put some whipped cream on his nose and laugh as he licks it off.

Dogs are man’s best friend. It’s as simple as that. The Ancient Egyptians worshipped cats and their society collapsed. You just can’t trust cats. Dogs will never lie to you. Their tails are built-in lie detectors. Dogs, dogs, dogs. They would get a perfect 17/17 but you have to clean up their shit way too often.

People are people. Pets are pets. People should have people names. Pets should have pet names. You aren’t going to name your kid Fido or Spot. Those are pet names, and your baby is a person. But for whatever reason, people insist on giving pets people names. It doesn’t work out so well. There’s something weird about warning a new houseguest that Billy might sniff their crotch. Don’t get weirded out if Bruce humps your leg. There are exceptions to the rule, like naming a pit bull Steve McQueen or paying homage to your best friend by naming your potbelly pig after him. But for most part, there is no valid reason for naming your dog Jason.

Getting Stoned and Watching Nature Shows

I like smoking weed, and I’m pretty good at it. One of my favorite things to do while high is watching nature shows. Nothing compliments the life and death struggle of prairie dog fighting a ferret like a freshly packed bowl. Buffalos and lions and giraffes are way more impressive when your mind is in a fog. There’s nothing more life changing than smoking a blunt and watching Planet Earth in HD. Getting stoned and watching nature shows is a past time, and it sure beats actually going outside.