I was just at my regular dive bar of choice after a stressful Friday at work. I had a quick round, paid out, and had to use the bathroom before I headed home. My bar isn’t usually too crowded, but it’s Fleet Week so the place was packed. I could see the two single-person bathrooms from where I was sitting and noticed there were three women chatting amongst themselves in front of the bathrooms. One of the bathrooms opened up one of the three women went in. A minute or two later she came back out and rejoined her conversation with her two friends. I got up, picked up my bag and things, and walked to the vacant bathroom and opened the door. And then the lady who just used the bathroom snapped at me and yelled that there was a line for the bathroom.

I blinked at her.

“She’s in line!” She slurred, pointing around one of her friends.

I said “OK”, stepped back, and let her friend go ahead of me. Then I turned back to the instigator and said my piece. Not sure of the exact phrasing but it was something like: “Just so you know, I was sitting down over there. I saw you three standing here and talking. I saw you use the bathroom. I saw you come out of the bathroom. Nobody else made a move for the bathroom. I got up, gathered my things and walked over here. I opened the door to the bathroom, and then you yelled at me that there was a line. If there was a line, she would have gone into the bathroom as soon as it opened up. That’s how bathrooms lines work. You didn’t have to yell and you didn’t have to be rude.”

I was pretty articulate about my points and my reasons were pretty valid. Her only retort was something about me not having thick skin. I guess I don’t. But I have to be nice to rude people all day at work, so I’m not going to take any bullshit when I’m off the clock.

I’m not a line cutter. There was no line. I’ll believe that until my heart stops beating and I take my final breath.

Another guy came up and tried to open the door to the other bathroom. I had to tell him that there’s a line and a line monitor and he needed approval from her. I’m petty, I know. I wouldn’t have it any other way.

Renewing Your License at the DMV

I had the day off today. I didn’t do anything fun though. I had to renew my license at the DMV. I made an appointment a few weeks ago, but that didn’t save me much time. I got to the DMV a half hour before my scheduled appointment. I waited in the line for people with appointments for about fifteen minutes just so the DMV guy could give me a number and tell me to wait until they call it. I found a chair and waited for about ten minutes. Then they called my number, I went to a window, and the DMV lady went over my paperwork. Then I had to take a vision test. I have terrible Asian eyesight, so that was pretty nerve-wracking. I did ok with both eyes, but everything went blurry when I had to cover my left eye. I thought I would fail right then and there, but I wasn’t as blind in my other eye. My vision was good enough for me to pass. That’s kind of scary. It makes me wonder how many blind drivers there are on the road. After I eeked out my narrow vision victory they took a copy of my thumbprint. Then I had to pay thirty-three bucks because that’s how much renewing your license costs. Then I had to wait in another line to get my picture taken. That line took the longest. It was only five people deep but it took about thirty-five minutes for me to get to the front. It only took about forty-five seconds for them to take my picture. I don’t know why it took so long. Renewing your license at the DMV sucks. I’m glad I don’t have to worry about it again for another ten years or so.

Waiting for a Burrito

I was hungry and craving a burrito earlier. And when you’re craving a burrito, getting a burrito becomes your top priority. I grabbed my skateboard and had to make a choice. I could go left or right. The burrito place on the left was closer but more expensive. The burrito place on the right was farther away, but they had better burritos for a cheaper price. I decided to go to the right. I got there and was dismayed to see the line going out the door. I decided to suck it up and got in line. I was only waiting for a few minutes when I heard the cashier tell a customer that it would take at least twenty-five minutes until his food would be ready. I needed a burrito, but I’m not going to wait a half an hour to get one. I had to go to the other burrito place.

I skated back the other direction, passing my house and continuing on for a few more blocks. Luckily there wasn’t much of a line. I was able to order within a minute or two, and was out the door in less than five minutes. I skated back home with my well-deserved burrito. As I peeled back the foil and bit into it, I noticed the time. It had been roughly twenty-five minutes since I left one burrito place for the other. But all that extra skating was worth it because I didn’t have to wait. Waiting for a burrito is a waste of time. I regret nothing.

Tagged as burrito, line, wait, waiting, waiting for a burrito

Cutting in line is when you enter a line or a queue instead of waiting at the end like you’re supposed to. Nobody wants to wait in line. Waiting sucks. Cutting in line is so much more convenient. If you cut in line, you should expect other people to get pissed off. They have the right to, so you have to make it look like you’re not really cutting. There are a few tricks and techniques to avoid angering the other people waiting. I’ve discovered that coffee works really well for line cutting. If you have two or three friends waiting in line and you plan on joining them, you should bring a few cups of coffee so it looks like you were on a caffeine run for the group. Or you can pretend that you finally found a parking spot. Cutting in line is a social taboo that everyone does, but you only object to line cutters when you are behind them. You hypocrite.

Waiting in line sucks, but there’s something awesome about being first in line. Everybody who lines up is eagerly anticipating something and the first one in line gets to experience it before everyone else. And that makes you better than them. They are jealous of you and you love it. You feel like you’re in charge, like you’re the king. It’s a very empowering feeling. You might gloat a little and nobody will blame you. Being the first in line brings certain responsibilities. You’re the representative for all the other consumers in line with you. You’re the one who tells the passers-by what the line is for. You’re the one that talks to the media. You’re the one to lead the charge when they finally open the doors. You’re the first in line. That’s something to be proud of. You earned this shit. There can be only one.

Waiting for the Bathroom at the Bar

You drink at a bar. That’s what you do. And drinking makes you have to pee. Eventually you’ll end up waiting for the bathroom at the bar. You have to wait in a single file line with other drunk patrons, alternating between random drunken conversations with strangers and checking your phone for texts and Facebook notifications. You’ll bitch and sigh and shuffle your feet while the line slowly creeps along. Finally you get your chance to drain your bladder and check your reflection, then you wash your hands and grab another drink. Fifteen minutes later you’ll be in line for the bathroom again. It seems like half your time at the bar is spent trying to order another drink or waiting in line to pee. As long as you’re drunk, who cares? 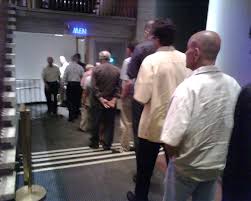 You run into the store for a bottle of water. You’re in kind of a rush, so you just want to grab the bottle, pay, and get out. But the universe has other plans. You grab a bottle and head to the cashier and are dismayed to see one cashier and five people waiting in line. Not only is there only one cashier, it’s the slowest cashier. Of all time. This guy doesn’t even seem familiar with a twenty-dollar bill. He can’t bag your purchases. He can’t run credit cards without calling his manager for assistance. You stand in line, you pout and sigh and check your phone every 5 seconds, but the line isn’t moving. I know that patience is a virtue, but this is malarkey.