There is a corner store a block from my house that has just about anything you can think of. They claim that if they don’t have it, you don’t need it. It’s pretty much true, so I go there almost every single day. I realized that the shopkeeper probably knows me better than anyone. He knows all my secrets because he knows what I buy. That’s a pretty dangerous power. He knows what kind of beer that I like. He knows what kind of food I like. He knows if my house is dirty. He knows if I have an ant invasion or a mouse in the house. He knows if I’m hanging out with friends that night or staying at home alone. And yet he never judges me (at least not to my face) so I will continue to shop there until I die or his store closes, whichever comes first. It’s important to be nice and polite to everyone, but especially towards your shopkeeper. You don’t want to piss him off. He has more dirt on you than you think. 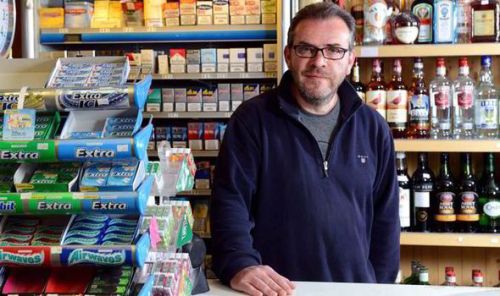 I decided to do some Christmas shopping today and I decided I would do it the old fashioned way. I went downtown and walked into actual shops. I went into a Target Express, I went into Old Navy, and I even went to the mall and walked around all the levels and explored random stores. It was real life Christmas shopping, just like I remember doing before the rise of Amazon and other online retailers. And it was a terrible experience. It wasn’t even crowded but there were a lot of angry shoppers and a lack of knowledgeable customer service representatives. I walked around the whole mall and only bought a handful of things. I thought getting up off my ass and physically going to a store would make the shopping experience more pleasant, more real, and more worthwhile. I was wrong. It was a complete waste of time. Sorry, Amazon. I’ll never doubt you again.

I’ve decided that I’m going to open up my own shoe store. I know that sounds crazy with today’s economy, but I have a killer idea. It’s revolutionary in fact. I’m going to open a shoe store that specializes in single shoes only. You buy the left or right shoe individually and you’re not allowed to buy a pair. Think about it. Shit happens and sometimes you lose a shoe. You still have the other one, only now it’s worthless because it’s missing its brother. You have to throw it away because nobody sells single shoes. Until now. Doesn’t seem so stupid now, does it? Trust me, I have it figured out. I’m even going to sell socks individually as well at the counter. That’s what they call an impulse buy. You can even buy socks is odd-numbered bundles so you can save even more money. I haven’t decided on a name yet, but rest assured it will involve a terrible pun.

A dollar store is a store where everything costs a dollar or less. They are typically found in malls or in the dodgy part of downtown. Sometimes they are ninety-nine cents stores, sometimes they are dollar plus stores, but they are all basically the same. Most of the merchandise is off-brand or bought at closeout prices. You’ll find cans of food that shouldn’t be canned. You’ll find cheap toothbrushes that you’d be scared to put in your mouth. You’ll find obscure products from countries that don’t exist anymore. You’ll find candy that even your grandma would be ashamed to pass out on Halloween. But you’ll always find a bargain, and that’s why dollar stores exist in the first place.

A divider stick is a piece of plastic that you find in grocery stores and convenience shops near the cashier. You put your groceries on the little conveyer belt and use the divider stick to create a temporary boundary around your stuff. It separates your items from everyone else’s inferior products. We use them because we are weird and oddly overly protective of things we haven’t bought yet. When the cashier starts to ring up the person if front of you, you should take his divider stick and give it to the person behind you. It’s polite and it’s etiquette and your mom wants you to do the right thing. You can also use the divider stick as a makeshift weapon in case of a robbery, but I wouldn’t recommend it because they aren’t very formidable.

It’s your day off and you finally have a chance to go to the store and catch up on errands. You write down a few essential supplies and then start shopping. You’re flying up and down the aisles, mentally crossing off each item as it enters the cart. Then you casually glance over your list one last time before you pay the cashier and head home. You start unloading your bags and realize that something is missing. You forgot to pick up something vital, one of the main reasons you went to the store. I call it the BLT Law because whenever I go to the store to get stuff for BLTs I come home with the bacon, lettuce and tomatoes, but no bread. I always forget the bread. Forgetting something on your list defeats the whole purpose of making a list. You wrote it down so that you wouldn’t forget it. But you still forgot it. Now you get to go all the way back to the store. Don’t you feel like a winner?

You run into the store for a bottle of water. You’re in kind of a rush, so you just want to grab the bottle, pay, and get out. But the universe has other plans. You grab a bottle and head to the cashier and are dismayed to see one cashier and five people waiting in line. Not only is there only one cashier, it’s the slowest cashier. Of all time. This guy doesn’t even seem familiar with a twenty-dollar bill. He can’t bag your purchases. He can’t run credit cards without calling his manager for assistance. You stand in line, you pout and sigh and check your phone every 5 seconds, but the line isn’t moving. I know that patience is a virtue, but this is malarkey.