I knew today was going to suck when I first woke up and went to take a shower and there was no hot water. It was ice cold. Some people like cold showers. They find them refreshing. I’m not one of those people. I like my showers piping hot. I want to have visible steam leaving my body when I shut the water off. A few degrees short of scalding is ideal.

I had to get a little creative. I put a pot of water on the stove and brought it up to a near boil. Then I turned on the shower, dipped the shower scrunchie poof ball into the cold spray, added body wash, and quickly lathered up, shivering all the while. Then I turned off the tap and slowly poured the pot of hot water over my head and shoulders, letting gravity do the dirty work. It wasn’t the ideal situation but it got the job done. I was able to wake up a little bit more and stink a little bit less. Hopefully there will be hot water when I get home tonight or my landlord will feel my wrath.

Half Frozen Bottle of Water

I’m a big fan of ice cold water. It’s refreshing and invigorating and thirst quenching. I found a pretty useful life hack online a few months ago that allows me to have ice cold water whenever I want it. All you have to do is take a used bottle of water, fill it half way, lay it sideways in the freezer, and leave it alone for a few hours. Once the water is frozen, you open the bottle and fill it up the rest of the way. If you do it right, there will be ice on one side and water on the other. The ice makes the water cold instantly and keeps it chilled for hours. No muss, no fuss. I keep a half frozen bottle of water in the freezer at all times. It’s a cheap and easy way to impress thirsty guests when they come over. They think I’m smart and clever for coming up with it. I don’t tell them that I stole the idea from the internet. It’s not lying. It’s deceiving. There’s a difference.

A mini fridge is exactly what it sounds like. It’s a miniature refrigerator. They are perfect for dorms, apartments, and offices. No man cave is complete without one (unless you have a kegerator, that trumps all). They are essentially glorified and electrified coolers. They aren’t too spacious but you can keep a couple of six packs in them with enough room left over for some sandwich materials and things to eat. I have a mini fridge. My mom is a teacher and she gave me the one from her classroom when I went to college. It’s followed me to the dorms and everywhere I’ve lived since. At one point I stopped using it as a fridge and started using it as storage space. I know that it still works because I accidently plugged it in one time. I woke up a few hours later and discovered a bunch of really cold computer cables and hard drives in my makeshift cabinet. They still worked okay after I thawed them out a little. I didn’t blame the mini fridge for my stupidity and that’s why I still have it to this day. This thing will become an heirloom.

I have an awesome roommate. She’s clean, respectful, she likes to cook and she makes extra for me to eat, and she always keeps a couple of pint glasses in the freezer. Nothing brings out the flavor of a beer like a chilled pint glass or a nice frosty mug after a long day at work. It’s hard to improve a quality craft brew, but pouring a bottle into a chilled pint glass is always a good start. You don’t want to drink from the bottle or a can anyway. Start keeping a few glasses in the freezer and experience beer the way you should. Be be forewarned, you can’t go back once you’ve start using chilled pint glasses. You wouldn’t want to anyway, but you are going to lose valuable freezer space.
Critically Rated at 14/17
Written, Rated, and Reviewed by Brendan H. Young 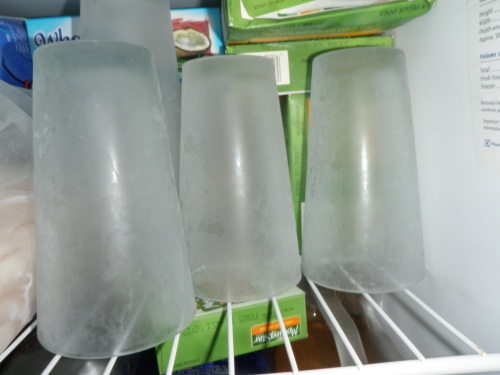 I was at my friend’s house the other day and I was feeling parched so I asked him if I could grab a glass of water. He handed me a glass, I took it, and I went over to the sink. I turned on the faucet, filled my glass, and took a sip. It was warm. I dumped it out, filled up my glass again, and took another sip. It was even hotter. I dumped it out, double-checked the faucet and made sure that it was on the cold side, filled up my glass again, and took another sip. It was scalding hot. That’s when I realized that the hot and cold were switched. If I wanted cold water, I had to go turn it to the hot side. I asked my friend why it was reversed. He shook his head and told me the story of how he once accidently insulted a plumber that was fixing a leak. The plumber got offended and switched the hot and cold water out of spite. It’s been like that ever since. The moral of the story is don’t offend the plumber. He can fuck with your pipes and fuck with your mind. 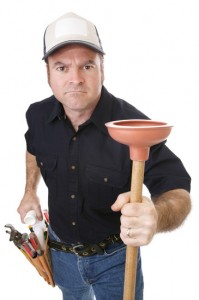 Seeing Your Breath in the Cold Air

One of my favorite things about cold days is seeing my breath in the air. When I was younger I would pretend like I was smoking a cigarette and I felt like a badass. I’m sure every little kid does that at some point, but I was really good at it and I looked really cool doing it. All the kids in my class agreed that I was the best fake smoker on the playground. I still enjoy seeing my breath in the cold air. It’s life affirming. I know that I’m still breathing, I know that I’m still alive, I know that I’m still here. Seeing your breath in the cold air is one of the great mysteries in life. Scientists still have no idea what causes the phenomenon, but I think it has something to do with protons and neutrons. I don’t know, I really didn’t pay much attention in Biology.

A cold snap is what old folks call it when the weather is really cold for a prolonged period of time. Younger people usually say that it’s cold as Hell, even though that doesn’t make any sense if you think about it. San Francisco is in the middle of a cold snap right now, and even though it’s not technically freezing, it’s still colder than anyone would like it to be. An unfortunate few have succumbed to the cold. The cold weather is an annoyance to some, but it’s a life or death situation for a lot of homeless people. We are lucky enough to be able to turn on the heater or put on another sweater. Some people don’t have that option. Don’t take that shit for granted.

I grab a few packets of Emergen-C every time I start sniffling and sneezing. Emergen-C is a powdered drink mix that contains a shitload of Vitamin C. Like a single packet has 1000 milligrams of Vitamin C. That’s 1667% of your recommended daily value. And they suggest taking it twice a day. That’s 3334%. That’s a whole lot of Vitamin C. It’s even more effective if you mix it with orange juice. If that doesn’t kick your cold’s ass, nothing will. It comes in a variety of flavors, like Super Orange, Tangerine, Raspberry, Lemon-Lime, Cranberry-Pomegranate, Pink Lemonade, Triple Berry… there are more but I never see them in stores so I don’t think that they are real. I tell friends to try Emergen-C whenever they are starting to feel a cold coming on. I’m not trying to help them; I just like telling people what to do.

Starting To Get Sick

I woke up with the sniffles and a runny nose and realized that I’m starting to get sick. Starting to get sick is worse than actually being sick. When you’re sick you’re just sick and you deal with it. All you can do when you start getting sick is take some vitamin C and hope that you’re not getting sick. You still have to suck it up and go to work. People will invite you to hang out and they won’t believe you when you say you can’t because you’re starting to get sick. That’s like saying you have to do laundry or wash your hair, it might be true but it’s a weak excuse. You’ll be peer pressured into going out when you know that you shouldn’t, and you’ll regret it the next day when you wake up fully diseased and phlegmy. Oh well, at least you’re not starting to get sick anymore.

People like being clean and taking showers helps people get clean. There are two main types of showers: hot or cold. Hot showers are the normal choice for normal people. They like water so hot it scalds their skin and fogs up the mirror. It’s warm, it’s inviting, it feels so right. Then there are cold showers. Most people regard cold showers as a form of torture or a sign that you need a new hot water heater. But some people actually like cold showers. They say a cold shower is refreshing, that it wakes them up. I think getting drenched with ice-cold water would be a lousy way to start the day. But it’s cool if you’re into that sort of thing; it just means there’s more hot water for me.

If you’re cold and too cheap to turn on the furnace, space heaters are a great alternative. These are portable heaters that you can take from room to room. You just plug it into the wall, turn it on, and it starts to warm up instantly. They are more practical than lighting a fire and are much safer if you don’t have a fireplace. It’s nice to be warm in the winter, just like it’s nice to be cold in the summer. The grass is always greener on the other side, right?

On really cold days you can see your breath when you exhale. It’s nature’s way of telling you to put on a jacket. When you were a kid you would pretend like you were smoking a cigarette when you saw your breath. Now you want to get coffee or hot chocolate when you see it. That’s how you know you’re growing up and maturing. There’s something poetic about being bundled up, completely warm and snug, and seeing your breath without feeling the cold. You have to appreciate the little things in life. 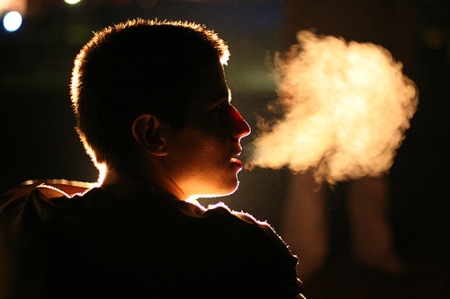