Wearing Sandals with Socks On

I’ll be turning thirty in a month. My twenties will be over. I will be considered an old man by everyone that is still in high school. And I’ve already decided that I’ll start wearing sandals with socks on. I know that it’s a fashion faux pas, but I’ll be too old to give a fuck anymore. I won’t care about looking cool, I’ll only care about being comfortable. And wearing sandals with socks on seems mighty comfortable. That’s why so many dads and grandpas dress like that. I won’t start sporting a fanny pack until I’m in my forties, but I’ll use my thirties to start getting acquainted with the geezer style of dress. That begins with wearing sandals with socks on and grows from there. Trust me, if I could stay sockless and in my twenties forever I would, but now it’s time to grow up and rock Crocs with socks. I guess this is growing up.

Tagged as growing up, old, sandals, socks, wearing sandals with socks on

Older Than the Athletes

One of the saddest things you can ever witness is an old person falling. When I was eleven years old my grandma was reaching for something on her dresser and she fell out of her wheelchair. I was the only other one home at the time and wasn’t strong enough to lift her up. She had to stay sprawled out on the floor while I went next door to find a neighbor to help. The worst part is how embarrassed she was. She was completely helpless and she knew it. It’s gut-wrenching to live your whole life independently and suddenly becoming reliant on other people. All you can do when an old person falls is to help them and hope they aren’t hurt. Their pride is always damaged. Treat them with dignity and respect while you console them. You could be the one lying on the floor someday.

Calling Somebody Old on Their Birthday

There are a million different birthday traditions that you feel obliged to practice. Let’s say that it’s your friend’s birthday and you want to celebrate. You’ll throw him a birthday party. You’ll buy him a birthday cake with birthday candles. You’ll buy him a birthday present and a signed birthday card. But it’s not officially his birthday until you give him grief about getting older. Calling somebody old on their birthday is the best way to remind someone about their mortality. They are one year closer to death, and you need to rub it in their face. Their saggy, old, wrinkled face. It’s a way to punch them in the gut on their special day. You need to do it out of love though, and not malice. You don’t want to make them cry, just feel a little less immortal.

I have a friend on Facebook who is constantly posting and sharing links, pictures, and videos on his profile. He has the same sense of humor as me, and we share a lot of the same interests, and most of the things that he posts are from websites that I visit regularly. But all the shit that he shares are at least a week old. He is behind on his memes and he doesn’t realize it. It’s new to him, so he assumes it’s new to everyone else. So he will post clips of Charlie biting his brother or a guy freaking out about a double rainbow and act like he’s a fucking trendsetter. Being behind on memes is like being behind on the latest celebrity death… Yeah, it’s sad that James Gandolfini died, but that was a fucking week ago, not four hours ago. The internet has an extremely quick turnover rate. If it’s two days old, I’m already over it. And so is everyone else. 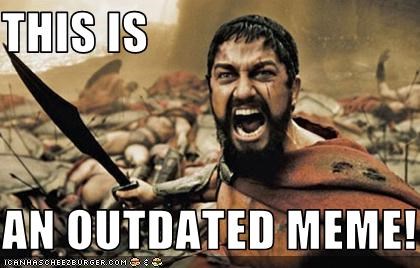 Tagged as behind on memes, facebook, internet, meme, memes, old

Pamela Anderson made her living by being the sexiest slut on the planet. She was the star of Baywatch (no offense to David Hasselhoff, but her bouncing breasts are better than yours). She had not one, but two sex tapes released to the public. Even Paris Hilton has more discretion. Pamela Anderson oozed sex appeal, and she was one of the few celebs that were sleazy enough that you though you had a shot with. But now she’s old and plastic and you feel dirty when you jack off to old pictures of her. It’s like wanking it to Britney Murphy. She’s dead and you’re a pervert. Pamela Anderson is long past attractive and a few miles past used. The sad thing is that most guys would still fuck her just to say they have. And you get the feeling she embraces that fact.