Once upon a time, about eleven years ago or so, I was invited to an ’80s party. That’s when you dress up in attire from the wonderful decade known as the 1980s. I didn’t have anything that could pass off as ‘80s, so I went to the thrift store. I found a pair of snakeskin pants for forty bucks. I bought them. I wore them to the party and received plenty of compliments (as I should have). If there was a contest, I would have won that shit. I’m not trying to brag, I’m simply trying to stress how amazing my pants were. My pants are still amazing in fact. I still have them and I rock them every so often when the situation calls for them. I wore them for Halloween this year for instance. I was an ‘80s zombie rock star.

I live in San Francisco and there’s always an occasion for wacky clothing. We have Bay to Breakers, Hardly Strictly, and random street fairs. Every true San Franciscan has some absurd clothing in their wardrobe. I have a leather trench coat, a shiny green silk shirt, and a camouflage Snuggie for instance. But my snakeskin pants are still the reigning champ of my absurd wardrobe. I don’t see that changing anytime soon. 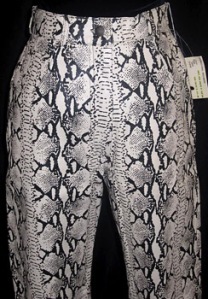 Forgetting About Your Laundry

You finally have a day off and a chance to wash that heap of dirty clothes in the corner of your room. You separate the colors and collect all the stray socks scattered around your room and throw it all in the washing machine. You’re not going to sit by the washer for thirty minutes, so you start doing a bunch of random things to kill time. You’ll tidy up around the house, you’ll watch TV, and surf the net. Then you’ll glance at the time and suddenly remember your laundry in a panic. It’s not a big deal if you have your own washer and dryer, but if you’re a schlub like me, you have to book it up to the Laundromat before someone throws your shit on the ground. Luckily, most of the time I realize that I forgot about it within a few minutes. But I know people who left their clothes at the Laundromat overnight. And then they had to buy a whole new wardrobe because all their clothes mysteriously vanished. That’s why you shouldn’t make a habit of forgetting about your laundry.

One downside of living in society is having to wear clothes all the time. So most people have a wardrobe. You can’t wear dirty clothes if you want people to accept you so you have to wash your shit every couple of weeks. Laundry day can be a chore and a hassle. Especially if you go to the Laundromat. You can either sit there and watch your clothes spin around for an hour or you can leave and hope that no one steals your shit. Neither option is very appealing.

The best thing about laundry day is that you can use it as an excuse, “I can’t do it that day, it’s my only day off and I need to do laundry.” It’s more practical that saying you have to go to the dentist and way more believable than claiming you have a bunch of errands to run.

Laundry day is a part of life, at least until you win the lotto and can afford a brand new outfit every day.