A Girl Reciting Everything She Ate That Day

It’s a known fact that girls keep an inventory of everything that they have ever eaten in their whole entire life. I’ve lost track of how many times a girl has told me what she ate that day. It’s always the same general story. It starts with her telling you that she’s fat. Not just fat, but SOOOO fat. Then she will proceed to list off every single thing that she ate that day and in the order that she ate it. It’s something like, “Oh my god, I’m so fat. I had half a Pop-Tart and a small bowl of Cheerios with bananas for breakfast, and then I splurged and got a small Jamba after yoga because I felt like earned it, and then I had half an Odwalla bar and 6 grapes with some water at the gym. Oh, and I had Kettle Chips before the gym. I had a salad at lunch and then Stacy and I were bad and split a cheesecake! It was chocolate and strawberry and it wasssssss ssssssooooooooo yummmmmmmyyyyyyyyyyy. I swear I could eat cheesecake like everyday….” It’s best to cut her off before you hear about dinner and all the other random snacks that she shoved in her face throughout the day. That’s awesome that you’re not bulimic but I don’t give a fuck what you ate. You look good though. 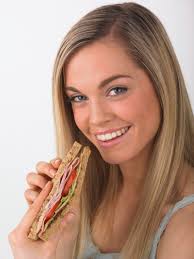