I clipped my toenails the other night for the first time in a few weeks. I put off cutting them for a lot longer than I should have. They were starting to look like little claws. I could hear them clacking on the hardwood floor whenever I walked around the house barefoot. They would dig into my socks and hook together like Velcro. It was not a pretty sight and it was not a good feeling. Neglecting your toenails is easy to do because your feet are hardly seen (especially if you’re a guy in cold city like San Francisco). I wake up, shower, get dressed, put on some socks, put on some shoes, and head out the door. I come home ten to twelve hours later usually. Then I crack open a beer, turn on the TV, and relax. Relaxing doesn’t typically include clipping my toenails. So they get long. I don’t mean for it to happen. It just does. Don’t insult my neglected toenails. I will scratch you with them. 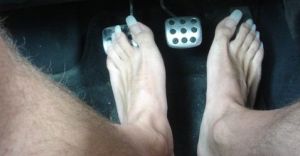 Clipping Your Nails in Public

Clipping your nails in public is one of the worst things a human being can do. It’s beyond disgusting. That kind of shit should only take place behind closed doors. Hygiene is important, but nobody wants to see you wipe your ass, nobody wants to see you using a Q-tip, and nobody wants to get one of your nail clippings in their eye. Oh, and don’t even get me started on the sound. That unique click-clack clipping sound causes cringes down my spine. I’ve seen old ladies clipping their nails on the bus. I’ve also yelled at old ladies to stop clipping their nails on the bus. I don’t understand how they think it’s ok to do that. I know I’m supposed to respect my elders, but I can’t respect them if they don’t have any sense of decency. It boggles my mind to know that some people can go through life oblivious to other people. It’s called courtesy. I just wish it was more common. 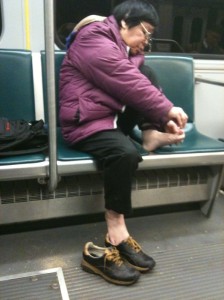 Have you ever waited a few weeks before cutting your toenail? And been pleasantly surprised at how big it is? Not just how big, but how smooth and perfectly formed it is? I made that! That came from me! I am a man. This is the closest to the miracle of giving birth that I can experience. Thank God. Well trimmed toenail clippings are little man babies.

If you are a little, old Asian lady, you clip your toenails on the bus. And you always sit next to me. You are gross.