So it’s your birthday and it looks like someone bought you a cake. It says “Happy Birthday,” it has your name on it, and it has more candles than you would like to see on it. You think of a wish, you blow out all the candles, then you pluck out the candles and lick the frosting off of them, and then it’s time to cut the cake. Cutting the cake is the least fun part of the cake experience. It’s actually work. You have to cut a slice, plop it on a plate, and hand it to somebody. Then you cut another slice, plop it on a plate, and hand it to somebody else. Then you cut another piece, plop it on a plate, and hand it to another person, but that person doesn’t want too much frosting so you have to cut another piece with less frosting and you serve them that. And then somebody else wants a corner slice. And somebody else only wants half a slice. And somebody else wants a slice with blue frosting. You’re over it after cutting five or six slices. Everybody’s too demanding and nobody is satisfied. Let them cut their own fucking piece. It’s your birthday; you shouldn’t have to do anything. 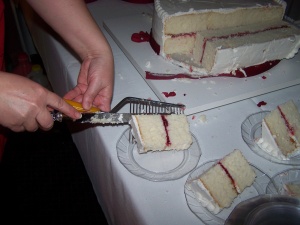