I was probably seven or eight years old when I got a magic trick kit for Christmas. It had everything you needed to perform over five hundred magic tricks! Instructional video included! I learned about basic sleight of hand. It had special packs of card that looked normal but had hidden secrets that only the magician knew about. It even had a fake thumb tip to make handkerchiefs disappear. I knew how to do all the basic magic tricks that birthday party clowns do. It was a fun little hobby that I drifted away from as I grew up.

I’ve forgotten how to do most of them, but I have a handful of tricks that I can bust out. Like I can still make a quarter disappear and find it behind your ear, I can tell you which card is yours, and a few other simple tricks that I don’t need customized props to perform. It’s come in handy from time to time. It’s fun to amaze drunk friends, it’s even more fun to amaze my little nephews. One of them is convinced that I am a god, the other one knows it’s not real but can’t explain it. “Hey, you’re tricking me!”

I have a gut feeling that he’ll be getting a magic trick kit when Christmas rolls around.

Now You See Me (film)

Now You See Me is a 2013 heist flick, but with magicians instead of bank robbers. Jesse Eisenberg, Woody Harrelson, Isla Fisher, and Dave Franco star as The Four Horsemen, street magicians who were brought together by a mysterious benefactor. They have a hugely successful show in Las Vegas, but they really hit the big time when they seemingly rob a bank in Paris during one of their shows. This gets the attention the FBI and Interpol, and then it becomes a cat and mouse game as The Four Horsemen attempt a few more magical robberies while the authorities try to figure how to stop them.

There’s lots of plot twists and shocking character revelations, but it’s a pretty by the numbers caper film. It’s kind of like Ocean’s Eleven meets The Prestige. There are multiple heists, people on both sides trying to outwit each other, and there’s an over the top action sequence that seems totally out of place. It’s an entertaining flick, but it’s pretty hollow. They use to many computer-generated special effects. They should have stuck to practical effects like how real stage magicians perform their tricks. At one point Isla Fisher floats around the stage in a CG bubble. That’s not a trick and that’s not impressive.

And there are way too many characters to keep track of or care about. Mark Ruffalo and Mélanie Laurent play the cops tracking down The Four Horsemen. Morgan Freeman plays a rival magician who exposes tricks and who helps the authorities. Michael Caine plays an Insurance magnate and the sponsor of The Four Horsemen with a shady past. Common has a supporting role as an FBI supervisor.

Now You See Me is just another Hollywood blockbuster that pretends to be smarter than it is. And it’s getting a sequel. It’s a franchise now. Bank robbing magician flicks are suddenly a genre. What is the world coming to?

A unicorn is a mythical creature that looks like a horse with a horn on its head. I don’t know why they are called unicorns. If they only have one horn, they should be called unihorns. That makes a lot more sense. Unicorns are a symbol of purity, grace, and magic. The horn is said to have healing powers and drinking the unicorn’s blood can make you immortal (at least according to the Harry Potter universe). Giants supposedly used unicorn horns as toothpicks. In the ancient world they believed unicorns were real and were probably based on sightings of unfamiliar animals and bad descriptions from unreliable eyewitnesses. In the middle ages they believed that unicorns could only be captured by virgins, so you should be insulted if someone calls you a unicorn-catcher.

A Ouija board is a way to contact spirits or scare your stupid friends. Everyone gathers around the board, which is inscribed with the alphabet, numbers, and symbols. They each put a finger on the pointer piece. The pointer moves around and spells out words and phrases. You can use it to solve murder mysteries, predict the future, or find out which celebrities are secretly gay. Ouija boards are for kids and drunk teenagers these days, but they used to be associated with the occult, dark magic, and demonism. I miss the old days.

Hayao Miyazaki is like the Walt Disney of the Japanimation world. He makes amazing and timeless animated family films, and Howl’s Moving Castle is one of them. It’s based on the book by Diana Wynne Jones, but I never read the book, so I can’t really compare them. It’s a decent story, but the animation takes it to a new level. This is a fun fantasy film. 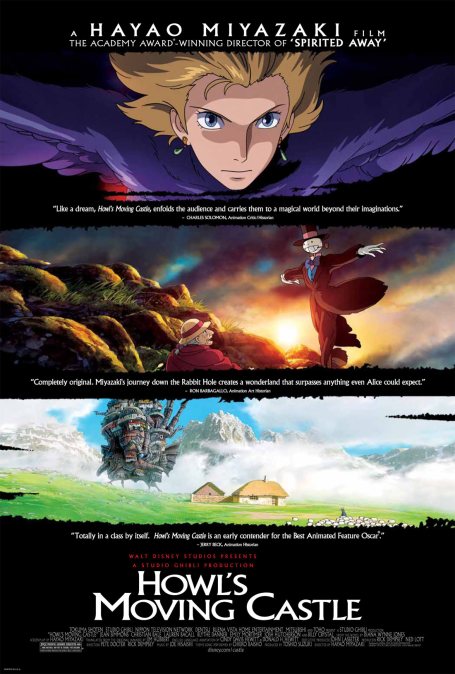 The movie is about a young hat maker named Sophie who makes hats. She’s kind of stuck in a rut and dreams of a better life. Instead she gets cursed by the Witch of the Waste, and Sophie gets transformed into an old woman. She can’t tell anyone about the curse, and so she leaves home to find a cure.

She helps out a scarecrow with a turnip for a head. The scarecrow is under a curse too, and even though Turnip Head can’t talk, he helps out Sophie as much as he can. Sophie eventually ends up in a moving castle, owned by a wizard named Howl. Howl has an apprentice named Merkl, and a fire demon named Calcifer (voiced by Billy Crystal).

Sophie’s country is about to enter war, and the king insists that all wizards be enlisted to help fight. Howl is a pacifist and doesn’t want to, and that kind of kicks off the larger plot. To help disrupt the war, he transforms into a bird-monster-thing, but each transformation makes it harder to return to human form. To complicate matters, a witch named Suliman is also after Howl, and a lot of stuff happens before shit gets resolved and you have your happy ending.

Miyazaki is a genius. He’s one of those filmmakers who creates a masterpiece and retires only to come out of retirement and make another amazing film. His attention to detail is impeccable. Every scene, shot, and frame is a piece of art. He makes the characters compelling and keeps the movie flowing at a good pace.

The castle is fantastic. You can sense the magic in the walls. It adds to the tone of the film and feels like another character, similar to Hogwarts in the Harry Potter movies. In films about magic and wizards it is important to have the sets feel magical and impressive.

A lot of Japanimation films can get lost in translation. Spirited Away is great movie, but unless you know the significance of bathhouse spirits in Japanese culture, you aren’t getting the full picture. Howl’s Moving Castle is based on an English author’s book, so the culture clash isn’t as evident. It also helps getting well known actors to dub the English version. Christian Bale, Billy Crystal, and Lauren Bacall are among the celebrities to voice a character.

You either like Japanimation or you don’t. There is no in-between. If you don’t know if you like Japanimation, Miyazaki is a good start. He’s got a few good movies, this is one of them. Spirited Away is probably his best. This one’s not too shabby.

Christopher Paolini’s Eragon is the first installment of the Inheritance Cycle. It is your standard sword and sorcery fantasy epic, complete with dragons, magic, elves, dwarves, werecats, an evil king, and an orc-like breed of monsters known as Urgals. A young farm boy named Eragon finds a dragon egg, which soon hatches, and Eragon becomes the first new Dragon Rider in over a hundred years.

The only other known living Dragon Rider is the evil King Galbatorix, the ruler of Alagaësia. The Dragon Riders were once guardians and warriors of peace, until Galbatorix went crazy, started a war, killed the other Riders, and made himself king. There is a secret resistance known as the Varden, who are trying to overthrow Galbatorix. The Varden and Galbatorix both want Eragon on their side, and the fate of the Empire is at stake.

Eragon lives in a small, isolated village with his uncle and cousin. One day he finds a weird stone, which turns out to be an egg, which soon hatches for him, revealing a baby dragon. The dragon and Eragon form a bond; he becomes a Dragon Rider and names her Saphira. Eragon seeks advice about dragons from the local storyteller, Brom. Before long, servants of the king come looking for Eragon and Saphira and kill his uncle. Eragon and Saphira decided to avenge his uncle’s death and set out on an epic journey with Brom as their guide. Along the way, he meets an elf named Arya, a witch named Angela, a werecat named Solembum, and a mysterious stranger named Murtagh who becomes a friend despite his shady history.

The basic plot is like Star Wars. A young boy on the verge of manhood discovers that he has fantastic powers, but it takes the death of his uncle to spur him into action. He must learn about his power, and he gets advice from a wise old mentor, and goes on a hero’s journey. Along the way, he rescues a damsel in distress and travels with another outcast. The world is reminiscent of Middle-earth. There are strange creatures, lots of history and folklore, ancient magic, and honor and chivalry still exists.

A Dragon Rider is an elf or a human that forms a bond with a dragon. The Rider and the Dragon are linked telepathically, to the extent that their personalities can merge together, and they are almost one soul. A Dragon Rider can use magic, but the dragons are the source of the magic. Dragon Riders become stronger, faster, and more powerful than a normal elf or human. The dragon chooses who they want to hatch for.

Paolini started writing this book when he was fifteen. It’s all the stuff that a teenager wants in a fantasy book. There’s a hero with a cool sword, dragons, evil creatures working for an evil king, magic, and epic battles. It’s a simple read compared to Lord of the Rings and Game of Thrones, but it’s more fun to read. There is more adventure, and the plot is easier to follow so you know what is at stake. This book establishes a lot of characters and locations, and the later books delve into them in more detail. Each book gets better as Paolini grows and matures as a writer. They made a really terrible movie that butchered the book. Don’t bother watching that shit.

Eragon is a good book and the start of a good literary franchise. The plot is cliché and familiar, but new things are scary and who likes change? Paolini created an amazing world and this book is a great introduction to the world of Alagaësia. And did I mention the dragons?