Hayao Miyazaki is like the Walt Disney of the Japanimation world. He makes amazing and timeless animated family films, and Howl’s Moving Castle is one of them. It’s based on the book by Diana Wynne Jones, but I never read the book, so I can’t really compare them. It’s a decent story, but the animation takes it to a new level. This is a fun fantasy film.

The movie is about a young hat maker named Sophie who makes hats. She’s kind of stuck in a rut and dreams of a better life. Instead she gets cursed by the Witch of the Waste, and Sophie gets transformed into an old woman. She can’t tell anyone about the curse, and so she leaves home to find a cure.

She helps out a scarecrow with a turnip for a head. The scarecrow is under a curse too, and even though Turnip Head can’t talk, he helps out Sophie as much as he can. Sophie eventually ends up in a moving castle, owned by a wizard named Howl. Howl has an apprentice named Merkl, and a fire demon named Calcifer (voiced by Billy Crystal).

Sophie’s country is about to enter war, and the king insists that all wizards be enlisted to help fight. Howl is a pacifist and doesn’t want to, and that kind of kicks off the larger plot. To help disrupt the war, he transforms into a bird-monster-thing, but each transformation makes it harder to return to human form. To complicate matters, a witch named Suliman is also after Howl, and a lot of stuff happens before shit gets resolved and you have your happy ending.

Miyazaki is a genius. He’s one of those filmmakers who creates a masterpiece and retires only to come out of retirement and make another amazing film. His attention to detail is impeccable. Every scene, shot, and frame is a piece of art. He makes the characters compelling and keeps the movie flowing at a good pace.

The castle is fantastic. You can sense the magic in the walls. It adds to the tone of the film and feels like another character, similar to Hogwarts in the Harry Potter movies. In films about magic and wizards it is important to have the sets feel magical and impressive. 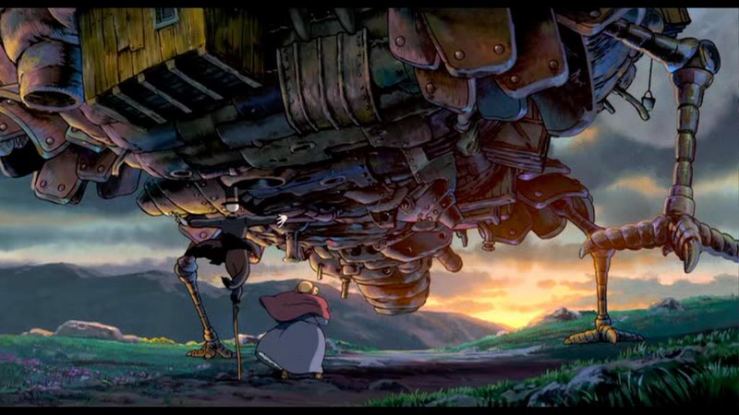 A lot of Japanimation films can get lost in translation. Spirited Away is great movie, but unless you know the significance of bathhouse spirits in Japanese culture, you aren’t getting the full picture. Howl’s Moving Castle is based on an English author’s book, so the culture clash isn’t as evident. It also helps getting well known actors to dub the English version. Christian Bale, Billy Crystal, and Lauren Bacall are among the celebrities to voice a character.

You either like Japanimation or you don’t. There is no in-between. If you don’t know if you like Japanimation, Miyazaki is a good start. He’s got a few good movies, this is one of them. Spirited Away is probably his best. This one’s not too shabby.