California Lager is another delicious offering from the Anchor Brewing Company in San Francisco. They are best known for Anchor Steam, but I think California Lager has the potential to usurp its position as the brewery’s flagship beer. People like lagers and people like California, so it’s only fitting that they would be enticed by a lager from California that’s called California Lager. It has a 4.9% alcohol content, which is in the average range for lagers.  It’s crisp and refreshing, and hoppier than most lagers. It tastes kind of like Stella Artois, but with more of an attitude. It’s a great day beer, ideal for hot summer days and backyard barbeques. I like it. And you’ll like it too if you’re a fan of good beer. 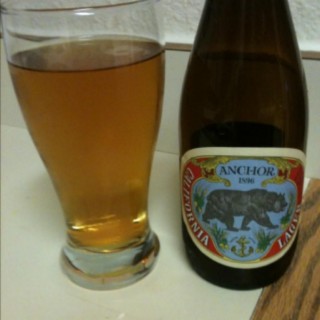 One of the many zany things that the Simpsons have brought to the world is Skittlebrau, the beer that has candy floating in it. Apu said it doesn’t exist and that Homer probably imagined it, but it inspired me to try it. People add slices of fruit to beer all the time, so why not add fruit candy? Skittlebrau works best with lagers; IPAs and Ales are too hoppy to taste the rainbow. I don’t float the Skittles in the beer, that would be a waste of Skittles and beer. Instead I pop a few Skittles in my mouth and wash it down with a swig or two. It gives the beer a fruity flavor. It actually improves the taste if you are drinking a swill beer or a forty. Skittles and beer go hand in hand. Skittles are good. Beer is great. Good + Great = Amazing.

“Red Stripe. It’s beer. Hooray, beer!” See that’s is effective advertising. Good job whoever came up with that one. It’s memorable, it says the product name, and it says what the product is.  It has a nice light, crisp taste, better than your average American lager like Bud or Coors. It is very drinkable and refreshing. The major downside is that the bottles are only 11.2 ounces, as opposed to 12 ounces, so you aren’t getting a full six pack. That’s pretty lame, they lose points for that.

Foster’s. Australian for beer. Sorry, I was obligated to say that. It really is Australian, there’s even a picture of a kangaroo on the can. This is a pretty decent lager, it is better tasting and more flavorful than typical American lagers. My friend lived in Australia for a few months and he said that no one drinks it down there. I’m kind of disillusioned now.

A premium lager from Belgium, this is very smooth and drinkable. Better than Budweiser and a little classier than Heineken. It could potentially be the best lager in its class. I know some people who add a little ground pepper to it. It gives it a little kick and doesn’t fuck up the beer so try it out. You might just like it. If you are out on the town and want a Bud, but don’t want to order it, get this beer and after a few rounds, you will be enamored.

The Kona Brewing Company is from Hawaii, and this is their most well known beer. It is a clear, light, golden color. Very crisp and refreshing taste, better than Budweiser and other common American style lagers. Look for it on tap or in glass bottles. This beer is a staple feature in their 12 bottle variety pack.