I skate around the city as my primary form of transportation. It wears out my shoes pretty quickly. My last pair of shoes got holes in the soles and I was about to buy some new ones until I remembered that I had a pair of Converse Chuck Taylor All Stars that I’ve only worn once sitting in the back of my closet. They aren’t your standard Chuck Taylors. They are Batman Chucks. They are black with yellow Batman symbols all over them. I’ve only worn them once before because they are so loud. They scream at you. They demand attention.

I didn’t want to waste my money on a new pair of shoes when I had a perfectly good pair already in my possession. So I put them on and I’ve been rocking them for over two weeks now. My girlfriend hates them, but most people love them. I’ve gotten a lot of compliments from random strangers. She hates that even more. My life has changed for the better since I’ve started wearing my Batman Chucks. I’d recommend for everyone to try them at least once but I don’t want you to steal my style. 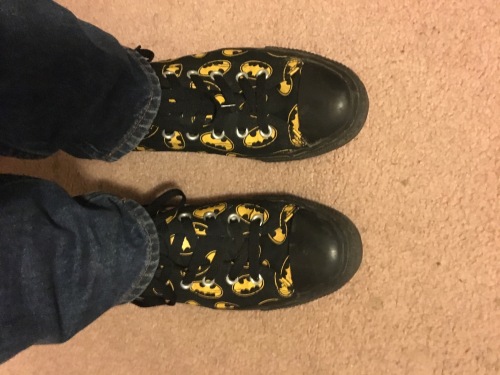