That’s not a bad thing. The cartoon was the first animated movie to be nominated for Best Picture at the Oscars. I’m sure this version will be nominated for a few awards as well. It’s already a blockbuster success and nobody should be surprised about that. It stars Emma Watson as Belle. Motherfucking Hermione Granger! You know how many Harry Potter fans were already invested once they heard about the casting?!? A lot. Like more than twelve. There are lots of Harry Potter fans. Dozens.

The only bad thing I can say about the movie is that the new songs are terrible. Terrible. Especially the Beast’s solo right before the climax. It totally ruined the mood. And you don’t want to ruin the mood right before you climax. I know that characters express themselves through song in musicals, but geez, enough is enough.

The special effects are top notch. Ewan McGregor’s accent is not. The story takes place in France, yet everyone speaks with a British accent except for one ridiculous French accent. But he can sing so he gets a pass. 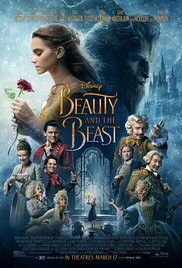