Trapped on the Train with a Crazy Guy

I was taking the train to work this morning and there was a little bit of traffic in the underground. I got delayed in the tunnel for about ten minutes. That happens a few times a month and it’s not so bad as long as you’re not overly claustrophobic or scared of earthquakes. This morning was different because I was trapped on the train with a crazy guy. He was a white guy, probably in his late twenties, wearing a gray hoodie and he was banging on the doors and screaming for the train to move at the top of his voice. He wasn’t yelling for the driver to move the train. He was yelling at the actual train. The driver was in the first train car, and we were in the second. I don’t think the driver knew what was going on. The crazy guy would take occasional breaks from screaming to run up and down the length of the train. There were two other guys besides me in our car and we were all a few seats away from each other. We all made eye contact with each other, silently acknowledging that there was a crazy guy running amok and that we had each other’s backs in case the crazy guy got even crazier. Ten minutes stuck in a tunnel seems longer than ten minutes. It’s even longer with a crazy guy. I don’t recommend it. I waited it out and the train eventually moved, the doors opened, I went to work, and the crazy guy stormed off to presumably find another inanimate object to yell at. Just another day in the city. 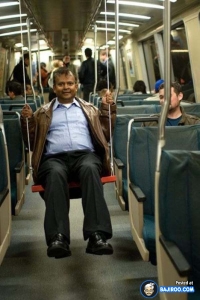