Sleeping on a Deflated Air Mattress

I spent last weekend sleeping on my friend’s air mattress in San Diego. It wasn’t a very good air mattress. It had a hole in it. It was a pinhole leak so the air would slowly seep out during the night. I’d fall asleep in relative comfort, only to wake up a few hours later sprawled out painfully on the floor, at which point I’d have to reinflate the air mattress. Luckily it had an electric pump so I didn’t have to use any lung power. Sleeping on a deflated air mattress is like trying to relax on a sinking ship while pretending nothing is wrong. Sooner or later you’ll have to deal with the problem or else you will drown. Or have a sore back in the morning. Either way it’s going to suck. I don’t recommend sleeping on a deflated air mattress. I’d rather sleep on the couch, in the car, or even on the floor. At least you don’t end up on the floor when you start out on the floor. 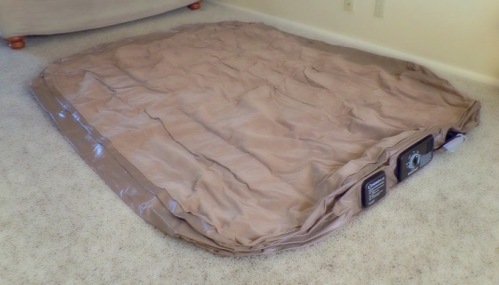