Like millions of people, I sometimes grind my teeth at night. Apparently I’ve been doing it for years because my teeth were noticeably worn down. My dentist suggested that I get a night guard. It’s basically a mouthguard similar to what athletes wear, except they are form-fitted to your teeth and you pop it in just before bedtime. It keeps your teeth from making contact when you grind them. It takes a little bit of adjustment before I got used to it, but now I can’t sleep without it. I no longer have to worry about any nocturnal dental trauma. I used to be a little ashamed of wearing it around people, but most people are accepting of it and more than a few have inquired about getting one for themselves. A lot of people grind their teeth and don’t know that there’s a solution for it. Sleep disorders seem to be a taboo subject matter. They don’t have to be. 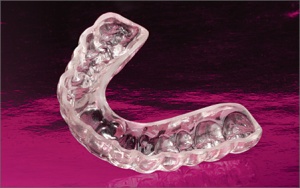