A smoke detector is a device that you’ll find in most homes and businesses. It’s called a smoke detector because it detects smoke, and when it does it lets out a shrill sound to alert you to any potential fires. Smoke detectors were designed to save lives and they have saved thousands of lives. I don’t have any numbers or statistics on how many lives are saved by smoke detectors every year, but I assume that it’s a few hundred. That sounds reasonable to me. You probably have a couple of smoke detectors in your house. Half of them probably don’t work. That’s because they run on 9 volt batteries instead of a direct electrical current. Whenever the battery gets low, the machine starts beeping and chirping to remind you to put in a new battery. But you don’t have any 9 volt batteries lying around, only AA and AAA batteries like normal people. So you take out the battery just so it stops beeping and you can finally experience some peace and quiet. After a while you forget about it. Then you’re fucked if your place ever does catch on fire. Oh well, you had a good run. 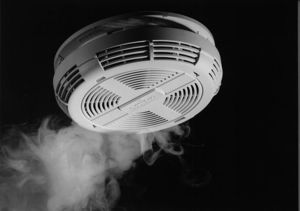