You’re in a heated argument and the other guy crosses the line and insults your mother. You love your mother and you have to let him know that. So you bitch slap him. That’s when you smack him in the face with your palm with the all the power and force of a punch behind it. It doesn’t have to be a form of domestic violence and it shouldn’t be. It should be the step before fists start flying and actual punches are being thrown. It’s like the precursor to a real fight, but it’s more of a physical insult. It’s soul-crushing. It’s demeaning, You don’t want to be the one being bitch slapped. You want to be the bitch slapper. But be wary of assault charges because that’s an actual possibility. Be careful who you’re bitch slapping. Ideally you’re only witnessing the bitch slap because that is pure entertainment. I’m not condoning violence, just bitch slaps. And don’t take this article seriously, it’s just filler material. I got to write about something. Thanks for reading it though. 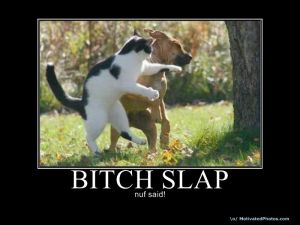