Airplane! is it. It’s the one comedy that everybody should see before they die. It is beyond a mere comedy. It is nonstop absurdity. Practically every single line of dialog is a joke. Almost every shot has a gag. The film premiered in 1980 and is still being quoted regularly. It had a tremendous impact on Hollywood and pop culture in general. The response is always the same whenever people find out that somebody hasn’t seen the movie: they all say, “Surely, you must be joking.” The unlucky chap doesn’t know that he is being called Shirley.

Jim Abrahams, David Zucker, and Jerry Zucker all wrote and directed the film. Robert Hays stars as Ted Striker, a former war pilot with a drinking problem, and he’s forced to fly a commercial airliner when the flight crew gets food poisoning. He’s trying to reconcile with his ex-girlfriend Elaine (played by Julie Hagerty), who happens to be a stewardess on the flight. Leslie Nielsen play Dr. Rumack in the role that turned him into a comedic genius. Lloyd Bridges has a role as a flight tower supervisor tasked with guiding the plane home safely, and he picked a hell of a week to quit drinking.

Some of the jokes are dated and the punchlines have been lost to time. I doubt anybody under the age of twenty will get half the jokes, but that doesn’t stop the film from being hilarious. Good comedy is timeless and that’s why Airplane! is still relevant today. Airplane! is a good personality test. I wouldn’t trust anybody who doesn’t appreciate this movie. 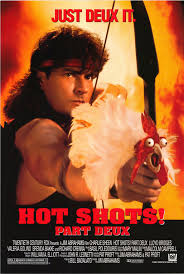 Jim Abrahams (Airplane!) directs this Top Gun parody starring Charlie Sheen, Cary Elwes, Lloyd Bridges, Jon Cryer, Kevin Dunn, and Valeria Golino. This was made back in the days when parody films were actually smart and clever, before it devolved into shit like Epic Movie and Vampires Suck. You have to respect the source material if you’re going to make a funny parody. You can’t just slap scenes and gags together to lengthen the film’s running time.

Hot Shots! actually has a plot. Topper Harley (Charlie Sheen) is a top Navy pilot with some daddy issues. He’s a natural pilot but is self-destructive, something that his therapist/love interest (Valeria Golino) tries to help him with. Cary Elwes plays a rival pilot feuding with Topper. His future Two and a Half Men co-star Jon Cryer also plays a fellow pilot and Kristy Swanson walks around in a bra, which is nice.

Even though this is a parody, it’s still a pretty solid film. It has a real plot, the characters actually develop, and the end result is an 83% approval rating on Rotten Tomatoes. Compare that to the 2% and 4% rating for Epic Movie and Vampires Suck. There is a joke or a gag every few seconds and most of them are hysterical. But there is also continuity to the jokes. When Lloyd Bridges spits pudding on Kevin Dunn’s face, the pudding stays on his face until he wipes it away. There is a Chihuahua that has the unfortunate habit of getting sat on. The funniest jokes are reoccurring ones.

Charlie Sheen carries the picture. He’s kind of like a younger Leslie Nielsen: they are both comedic actors, but they aren’t really comedians. They both have a deadpan delivery while doing the absurd. Hot Shots! isn’t as funny as Airplane!, but that’s a tough act to follow.