There are two types of people in the world: fans of Harry Potter and everyone else. Me, I’m a fan of Harry Potter. A part of my life ended back in 2007 when Harry Potter and the Deathly Hallows was released and the series ended. But then J.K. Rowling announced that she would continue the story onstage in a play. She also realized that not everyone would be able to see the production so she released the script in book form as well, bless her soul. Harry Potter and the Cursed Child Parts I & II (Special Rehearsal Edition Script) was released on July 31, 2016 and the Harry Potter nerds suddenly had a new story to lose their shit over.

I kind of slacked off and forgot to preorder a paper copy, but I bought the e-book version and read the entire thing on my iPhone in a couple of hours. It’s mostly dialogue with a little bit of stage direction so it’s a much faster read than the later books in the series. It was written by Jack Thorne and John Tiffany and based on a story by J.K. Rowling. The story starts in the epilogue of the Deathly Hallows with an older Harry sending his sons James and Albus off to Hogwarts. I don’t want to say too much else. Spoilers aren’t fun. And you should be friending to read it for yourself so I won’t give anything major away. Harry, Ron, and Hermione are important characters, but the plot revolves around Albus Potter and Scorpius Malfoy (Draco’s son). They are the next generation of wizards and they are trying to escape the shadow of their fathers.

We visit old charters. We meet new ones. And it feels good to be back in the wizarding world, I must say. The humor and charm are still there, as is the sense of dread that something wicked this way comes. It’s very satisfying. I wish it was longer. It’s always sad to reach the end of a great story, and this definitely seems like final chapter. I hope that J.K. Rowling has more in store for us, but this is a solid way to say goodbye to Harry Potter. Goodbye, Harry, old chum. 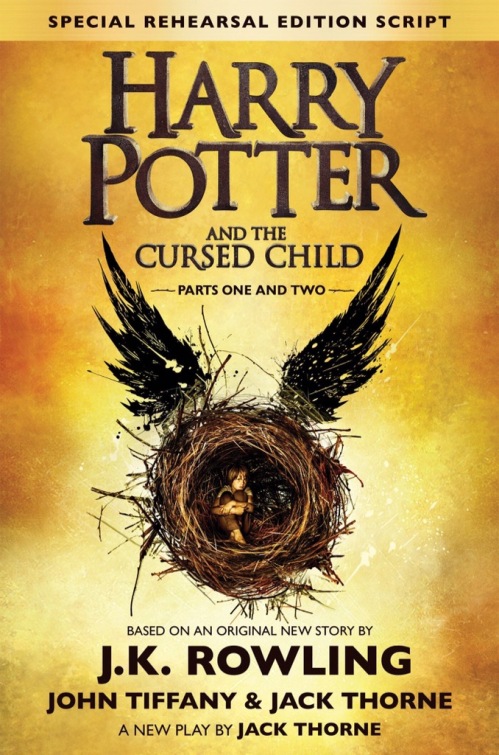 Harry Potter and the Order of the Phoenix (book)

This is the longest book in the Harry Potter series, and my personal favorite. There is way too much to review, so I’ll just be like the movie and leave out a bunch of stuff. J.K. Rowling takes Potter to a whole new level in this novel. Voldemort is back, but Cornelius Fudge and the Ministry of Magic refuse to believe it, and instead launch a campaign questioning Harry’s integrity and Dumbledore’s mental state.

The Ministry of Magic starts taking over Hogwarts slowly. First they make Fudge’s loyal employee, Dolores Umbridge, the Defense Against the Dark Arts teacher. They gradually start imposing more and more decrees, and get rid of Hogwarts staff that threatens them politically. Fudge is extremely paranoid of Dumbledore, thinking he’s starting an army to seize control of the Ministry. Umbridge wont let the students perform defensive spells.

Hermione is weary of not learning, and she convinces Harry to teach her and a few other willing students defensive spells. He is reluctant at first, but eventually chooses to lead the fight against Umbridge. Harry, Ron, and Hermione recruit a few other students and form Dumbledore’s Army.

Life at Hogwarts gets more and more miserable as the Ministry takes over. Umbridge gradually becomes Headmaster, and Dumbledore is forced out. The earlier books were full of hope; this book is full of despair. Harry spends a lot of time being angry. He is still haunted by Cedric’s death, he is angry that he is out of the loop, he is hurt that people don’t believe him. But he chooses to fight, he wants to fight. He becomes a leader by choice.

Voldemort tricks Harry into thinking Sirius is in danger. Harry leads a small band of Dumbledore’s Army on a rescue mission, and realizes it’s a trap. They become overwhelmed by the Death Eaters. Harry finds out Voldemort is interested in a mysterious prophecy that holds answers to Harry’s past. Harry and his friends put up a fight, and suddenly Dumbledore and members of the Order of the Phoenix show up to help. In the midst of the battle, Bellatrix Lestrange kills Sirius. Dumbledore and Voldemort have a fierce duel, and you see why Dumbledore is the only one Voldy ever feared.

Neville also becomes more important. You learn about his past and how his parents were tortured into insanity by Bellatrix Lestrange. He is an orphan of sorts, just like Harry. He learns a lot with Dumbledore’s Army and joins Harry, Ron, Hermione, Ginny and Luna at Department of Mysteries and fights bravely. The prophecy also reveals that Neville could have been the Chosen one. “The one with the power to vanquish the Dark Lord approaches … born to those who have thrice defied him, born as the seventh month dies … and the Dark Lord will mark him as his equal, but he will have power the Dark Lord knows not … and either must die at the hand of the other for neither can live while the other survives … the one with the power to vanquish the Dark Lord will be born as the seventh month dies …” Neville and Harry were born just one day apart, both their parents defied Voldy, but (SPOILER ALERT!) Voldemort marked Harry as his equal. That’s privileged information if you never finished the series. Sorry if I ruined your life, but it’s been out for a while.

The Order of the Phoenix is where bits and pieces from the earlier installments start to fall in place. You can start deducing where Harry and the story are going. You start to think that maybe Harry really is the Chosen One. There are many subplots and foreshadowing and Easter eggs. This book is where the series really takes off. There might be a lot of superfluous material, but when it comes to Potter, there’s no such thing as too much.

Harry Potter and the Chamber of Secrets (book)

Harry Potter is back for his second year at Hogwarts, and things are darker off the bat. A mysterious house elf named Dobby warns Harry of a plot against him and begs him not to return to Hogwarts. It would be pretty uneventful if he did, and so of course he goes back.

Someone has opened the fabled Chamber of Secrets, unleashing an evil that preys on Muggle-born students, turning them to stone. Harry is a prime suspect, and the other students start to become weary of him.

Of course it’s not Harry. He is the hero. He figures out what is going on with the help of a petrified Hermione, and he saves the day again.

J.K. Rowling’s second installment of the Potter saga introduces new and important characters like Dobby, Gilderoy Lockhart, Lucius Malfoy, and Arthur Weasley. She also plants more story arcs that will be resolved later, i.e. the powerful diary of Tom Riddle. There are a lot of similarities between Chamber of Secrets and the Half-Blood Prince. This is a great sequel and a necessary step to building a franchise. It sets up a lot for the future books as well.

This house is full of smart and clever people. This is the nerd house of Hogwarts and they are tri Lams (that’s a Revenge of the Nerds reference, anyone? No? K, nevermind). Hermione Granger was almost in this house. That’s how you know that smart ones go here. All the other houses require a password to get into their dorms, but Ravenclaws must answer a constantly changing riddle to gain entrance. Cho Chang is the best known Ravenclaw. If you aren’t in Gryffindor or Slytherin, you want to be in this house.

The brave and noble come to this house. Everyone wants to be a hero or at least decent and nice. If you want to stand up to evil and stand up for what is right, than this is the house for you. Notable Gryffindors include Hermione Granger, Ron Weasley, and motherfucking HARRY POTTER. This is the best house at Hogwarts, and they are winners. We like winners.