Mr. Pibb is the Coca-Cola Company’s version of Dr Pepper. Well, it was. Apparently they changed the formula and the name. It’s Pibb Xtra now. It’s been that way since 2001. I had no idea. I’m sure I’m not the only one.

I always thought that Mr. Pibb got the short end of the stick. It’s supposed to be a clone of Dr Pepper, but it doesn’t have an equal name. Dr Pepper sounds important, like a soda that went to med school. Mr. Pibb has a generic title. It should have been Pibb, M.D. or Professor Pibb. Something with more clout. Now it’s Pibb Xtra which sounds more like a Mountain Dew clone. Extreme.

When I was a kid, my favorite soda was all the sodas mixed together. You get your cup, you go to the soda fountain, and you take a little bit of each soda until your cup is full. We used to call it a Suicide. Other people call it different things, but it’s still the same thing. A Suicide has no set recipe and it will taste different every single time. Sometimes it will taste horrible, sometimes it will taste great. It all depends which sodas they have on tap. Some sodas don’t mesh well with others. A diet soda will always taint the Suicide with a weird aftertaste, so you should avoid that. And Pepsi contaminates it immediately. Dr Pepper is one of the best sodas to use. Some people consider Dr Pepper to be a Suicide soda by itself because it already has 23 different flavors. Adding it to a Suicide will make your mouth happy. You should make a Suicide if you’ve never had one before. Have fun, experiment a little, and be creative.

If you’ve ever wondered what Dr Pepper with cherry would taste like, then you should try Dr Pepper Cherry. It’s Dr Pepper with cherry flavor added to it. It seems like a good idea, but it’s a little unnecessary. Dr Pepper has a unique taste because it blends 23 different flavors. Adding the cherry flavor makes it an even 24. It’s a lot for your taste buds to handle, and no single flavor steals the show. You can hardly taste the cherry. It just blends together with the Dr Pepper. I’m not that impressed with it. It’s a decent soda, but I’d rather have a Cherry Coke or a regular Dr Pepper. Or a beer.

Diet Dr Pepper really does taste like regular Dr Pepper. There is a really slight aftertaste, but it’s the diet soda that tastes the most like its full calorie clone. Most diet sodas should taste like the real version. We have seedless watermelon and blue boner pills… come on science, do something productive with soft drinks.

Dr Pepper is a soda that has 23 flavors all competing to make one very unique soda. It’s dark like a cola, but you can’t define its taste. There is way too much going on. It’s pretty good though. It’s not that light; it’s not that refreshing, but sometimes you feel like a Dr Pepper. They spell it without a period after the Dr, so my spellcheck is going crazy. Yes, that’s how I want it spelled, leave me alone. 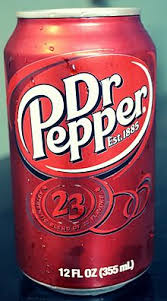