Bundaberg Guava is a non-alcoholic guava flavored sparkling drink. Bundaberg is an Australian beverage company best known for its Ginger Beer. Apparently they have a whole lineup of brewed drinks they refer to as the Sparkling Selection. They have Lime, Pink Grapefruit, Passionfruit, Peachee, Blood Orange, and Guava. I saw a few different flavors at the store. I chose Guava. I don’t know why, it spoke to me. The first thing I noticed when I was about to drink it was the notice on the bottle that tells you to invert the bottle before you open it. I inverted the bottle. Then I opened it. It spilled everywhere. Just kidding, lol, I crack myself up. Where was I? Oh yeah, so I inverted the bottle, returned it to the upright position, and then opened it. I took a whiff and got the muted aroma of guava. You can definitely smell the guava, but it’s fainter than you’d expect it to be. It tastes like fizzy guava juice, only not as sweet as juice and more sweet than a guava-infused sparkling water. It has 39 grams of sugar, so it’s more like a soda than anything else. I like it. I approve. It tastes good enough to make me want to try the other flavors. 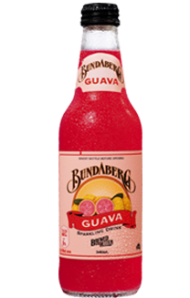