You’re walking down a crowded city sidewalk when a familiar face passes you by. It takes you a moment to realize that it’s not somebody that you know personally, it’s a celebrity. It’s somebody famous. And this is your only chance to say something to that celebrity so you have to say something. But what do you say? Approaching a celebrity is a real life scenario that they never prepare you for in school. There is no set etiquette other than don’t grope them and don’t stalk them. Most of the time when you see a celebrity you don’t do make an attempt to meet them, you just mention that you saw so-and-so at such-and-such to your friends later. But sometimes you come across a celebrity that was in your favorite TV show, movie, or who plays for your favorite team and you have to say something to them because they truly inspire you and this might be your only chance to say something to them. Start by saying their name so that they know that you know who they are and that you’re not confusing them with somebody else (Samuel L. Jackson is not Laurence Fishburne, Bill Pullman is not Bill Paxton). Then say that you’re a big fan of whatever they did for whatever reason. Then ask them what you wanted to ask them. Extend your hand if you want a handshake. Take out your camera if you want a picture. Take out a pen if you want an autograph. Get to the point. And don’t take it personally if they dismiss you. The more famous the celebrity, the more people approach them and the less likely they will humor you. Don’t get butthurt if they ignore you or snub you. Just don’t be a creeper. 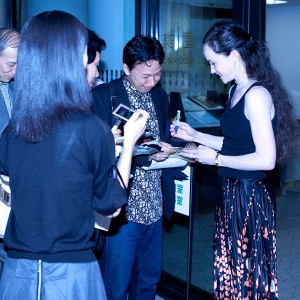