One of the perks of being a beer guy is discovering a new beer. I went to my local liquor store the other day and the clerk told me to try a bottle of Worthington’s Red Shield. It’s an English Pale Ale/Blond Ale from England. It’s a nice golden color with a mild amount of carbonation. It has a bready malt aroma primarily with hints of grass, earth, caramel, and toffee. It tastes like it smells, it’s malty with some earth tones and a little bit of caramel and grains. It’s kind of bland, but in a crisp and refreshing way. It still has more flavor than Budweiser and other domestics. It only has an alcohol content of 4.2%, which makes it a great beer for day drinking. I would get this beer again, but I wouldn’t go to England to get it. 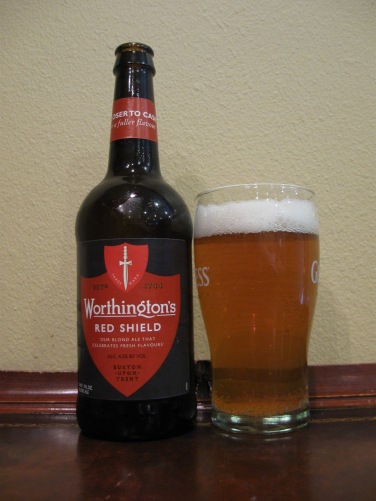