My Favorite Moment of The Simpsons

The Simpsons has been on the air for 24 seasons and counting, there have been millions of great jokes and gags over the decades. But one gag stands out above all the others. Way back in the seventh season there was an episode called “Marge Be Not Proud.” Bart gets caught shoplifting at the Try-N-Save and Marge is hurt and disappointed and gives Bart the cold shoulder, leaving him out of family activities. He comes downstairs and sees everyone drinking hot chocolate. Marge hands him a cup but there’s no marshmallow in it. When he asks about it, Marge says that he’s old enough to put the marshmallow in himself. So he picks up a marshmallow, drops it into the cup, and it instantly expands and absorbs up all the hot chocolate. He turns the mug over and it slides out and plops down on the table. He didn’t just fail, he failed spectacularly and he knows it. He dejectedly begins carving into it while Grampa eagerly asks for a slice. It’s completely absurd. It doesn’t make any sense. And it makes you want a hot chocolate marshmallow slice too. I still laugh out loud every time it pops into my head. It sums up The Simpsons style of humor wonderfully. And it reminds you that the seventh season happened a long time ago. 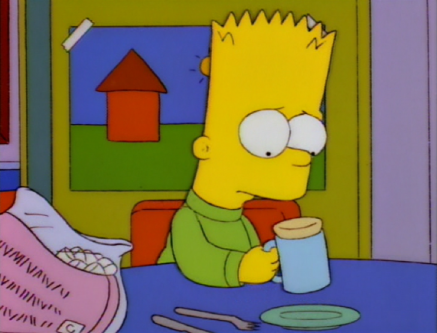