Dream Country is the third and shortest volume of The Sandman series. It collects issues #17-20 and each of the four stories is self-contained. Calliope is about a writer who imprisons a Muse. A Dream of a Thousand Cats explores how our feline friends experience dreams. A Midsummer’s Night’s Dream shows the premiere of Shakespeare’s play performed in front of an unusual audience. Façade is about a former hero who desperately wants to die but can’t. Morpheus is almost a secondary character in the first three stories and doesn’t even appear in Façade. Dream Country deviates from the main storylines somewhat, but it is thematically relevant, and it has some of the most memorable moments of the series.

Calliope is the first story. Richard Madoc is the author of one successful book, but he is suffering from writer’s block and is way past the deadline for his follow-up novel. He makes a trade with another writer. He gives the writer a bezoar in exchange for Calliope, who is one of the Muses from Greek mythology.

Madoc spends the next few years spending his days writing and raping his secret prisoner. Madoc gets more and more success and fame, and Calliope becomes more and more depressed. She’s able to get a hold of Morpheus and you can tell that there’s some history between the two of them. Morpheus tells Madoc to give her up, but Madoc doesn’t want to because he needs ideas. So Morpheus gives him what he wants: ideas that never stop coming. The flood of excess ideas drives Madoc crazy, but you can’t feel sorry for a rapist.

A Dream of a Thousand Cats is one of the most memorable stories in The Sandman. It’s about a secret cat meeting with a special Siamese cat keynote speaker. The Siamese cat tells an epic story about falling in love with a Tomcat, which resulted in a litter of kittens. Her owners didn’t want the kittens and killed them, and the Siamese cat grows disillusioned with being a pet.

She has a dream where she goes to the Dreaming, and finds Morpheus in feline form. Morpheus tells her that back in the day cats were in charge and humans were subservient. But then man found out that dreams shape the world and a thousand humans dreamed that they were in charge and the world became what it is now. The Siamese cat goes around spreading her message, hoping that she can convince a thousand cats to dream of a world where cats are king again. You’re gonna love this story if you’re a cat person. Dog people might also find it interesting.

A Midsummer’s Night Dream is one of those comics that gets accepted as genuine literature. It even won a World Fantasy Award, the only comic to achieve that feat. It’s probably accepted by the mainstream because it deals with Shakespeare. And it does it in a clever way. Shakespeare and his theater troupe perform A Midsummer’s Night Dream for Morpheus and some notable guests from Faerie. Gaiman makes it meta because Robin Goodfellow (Puck), Titania, and Auberon are audience members and also characters from the play. Robin Goodfellow even takes over playing himself at one point. It’s one of the most creative takes on Shakespeare to date. 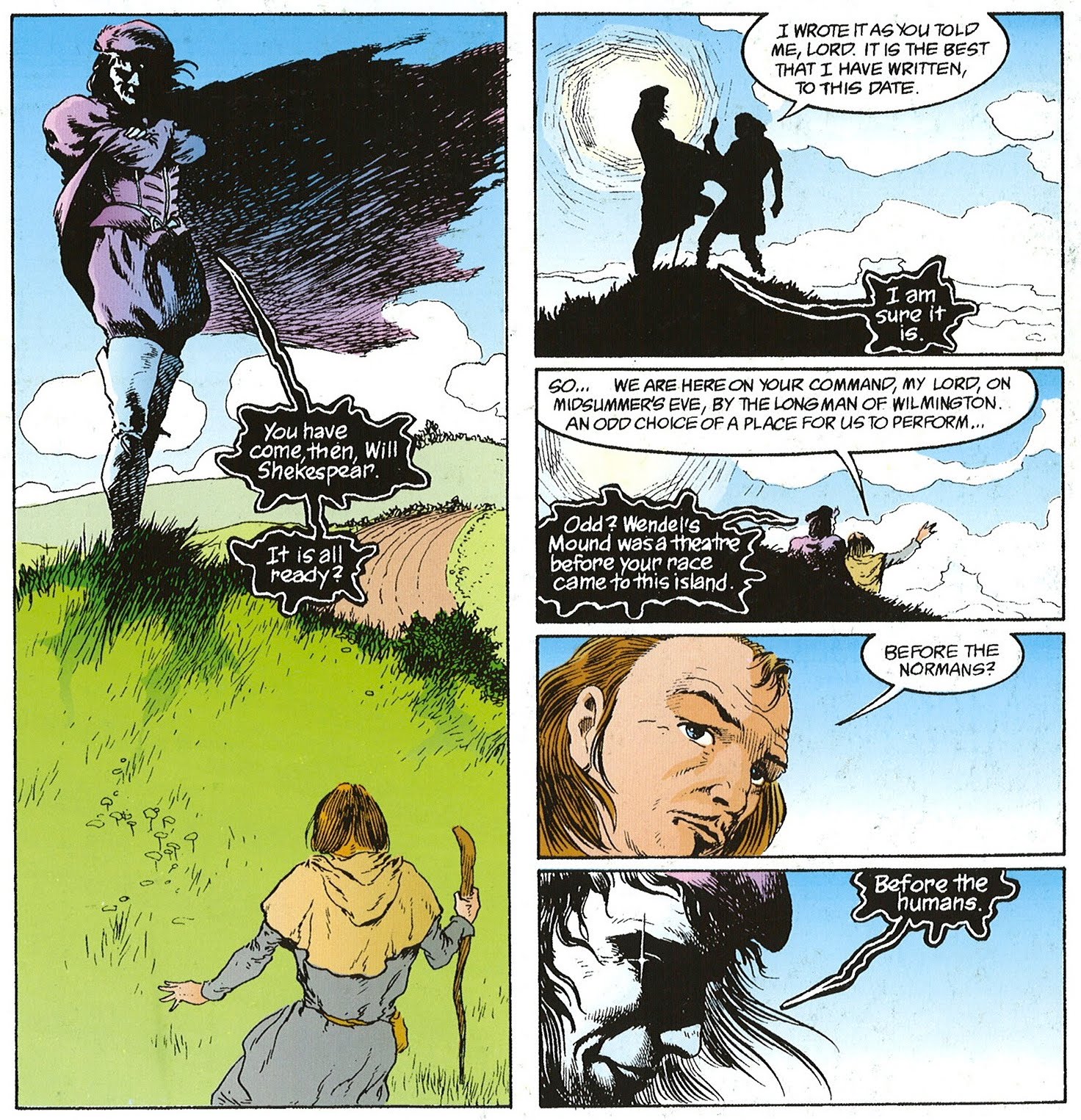 Façade takes an obscure and forgotten DC character named Element Girl and shows what happens to a hero that has given up. Urania Blackwell has been forced to retire, she has no friends or family, and no reason to live other than the fact that she can’t kill herself. Her superpowers won’t let her die, and she wants to. It’s a short and depressing story that ends on a happy note when she finally dies. Death can be a good thing for some people.

Dream Country is a great introduction to The Sandman. It’s short, it’s memorable, it’s significant, and you can see if you want to read the other volumes without spoiling the main plot. You can try the flavor of The Sandman and see if it’s right for you.