David Yates directs Emma Watson, Rupert Grint, and Daniel Radcliffe once again as the Harry Potter movie series reaches its epic conclusion. Harry, Ron, and Hermione track down the remaining Horcruxes and Harry and Voldemort face each other for the final time. And it’s all in mediocre 3D!

This movie marks the end of an era. You realize that you were spoiled by having eight awesome movies based on seven amazing books coming out over ten astounding years. You saw the kids grow up on screen, like British Olson Twins, but their careers didn’t end when they turned eighteen. With the 19 Years later epilogue at the end, you get to see them age into middle-aged adults. It’s cool to see how much those little tykes have grown.

Almost everything in the movie happens during one long day. Everything from the Gringott’s raid to Harry breaking and throwing away the Elder Wand happens pretty much within a 24 hour period. Harry’s day is way crazier than anything Jack Bauer ever had to deal with.

Harry’s quest to destroy Voldemort’s Horcruxes takes him back to Hogwarts. The Order of the Phoenix and Harry’s supporters all show up to take on Voldemort and the Death Eaters in one of the biggest and best battles in cinematic history. There are spells and creatures and death and destruction all jumping out of the screen and smacking you in the face. It wasn’t the best 3D movie, but it wasn’t the worst either. 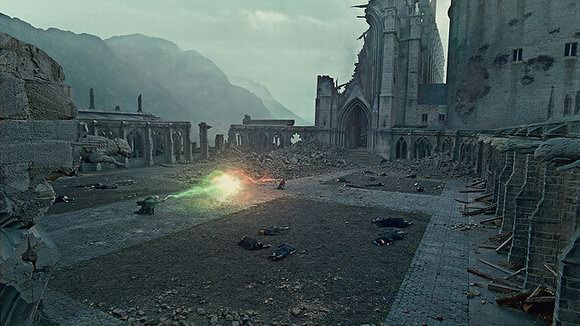 Alan Rickman finally gets more than a few lines. Snape is the best character in the books, and Deathly Hallows is kind of his coming out party. His secret past is revealed at last. Harry exploring Snape’s memories in the Pensieve is one of the highlights of the film. It is brief but thorough.

I was a little nervous that Neville wouldn’t get to kill Nagini. In the book, Harry finds Neville and tells him to kill the snake. In the movie, Harry tells Ron and Hermione to kill the snake. Nagini was about to attack Ron and Hermione, but than Neville comes out of nowhere to decapitate the snake and relieve my fears. Neville is my favorite character. If he didn’t complete his story arc I would have written David Yates a strongly worded letter voicing my displeasure.

The movie was a pretty faithful adaptation for the most part. There are a few nitpicky things that would have improved the movie. They should have included Dumbledore’s backstory and not just hint at it. And Harry should have used the Elder Wand to fix his broken wand before he gets rid of it. Both the book and the movie screwed over Lupin and Tonks by killing them off-screen. I was hoping the movie would show how they bit the dust.

I was sad when the movie ended. Harry Potter is over. No more books. No more movies. No more reason to live in this cruel world.