The Bureau is Made of Redwood

I used to have a huge infatuation with ghosts and haunted houses when I was growing up, and the Winchester Mystery House was one of the tourist attractions that I always wanted to go. Sarah Winchester was a rich and eccentric old lady who was convinced that all the people who died from Winchester rifles would come back to haunt her. So she constructed a huge mansion that was continuously being built, remodeled, and redesigned in an effort to confuse the spirits. Some stairways lead directly into the ceiling, there are doorways to nowhere, there are secret passageways, and the general layout of the house is completely chaotic. 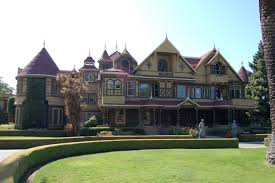 They offer guided tours daily, and I got to cross it off my bucket list a few years ago. My friend and I went together and we felt kind of out of place. We were the only twenty-somethings there. There were a few senior citizen couples and a few small families on the same tour as us. At one point we went into a small room and the guide pointed out a beautiful wooden bureau. It was a huge dresser, majestic and regal, and probably worth thousands of dollars. The guide asked us if we knew what kind of wood it was. Everyone just kind of shrugged their shoulders and rolled their eyes. Nobody knew what kind of wood it was and apparently nobody cared. But then one of the dads in the group casually raised his hand and said, “The bureau is made of redwood.”

The guide looked shocked. “That’s right,” he said. “How did you know that? I’ve been doing this tour for fifteen years. I ask that question four times everyday. Nobody’s ever gotten it right before.”

The dad glanced down at his two kids who were staring back at him with awe. “Well,” he said, “I went on this tour with my dad when I was a kid. They asked that same question and my dad was a lumberjack and knew that it was redwood. And if it was redwood then, it’s probably still redwood now.”

Everyone had a bit of a chuckle, but that whole exchange really resonated with me. That was the most memorable moment of the entire tour. I felt like I just witnessed a private moment and the birth of a new family tradition (which I fully intend to steal). I hope that one day his kids will come back to the Winchester Mystery House with their kids, and that when the guide asks about that fancy wooden dresser, they can answer that the bureau is made of redwood and explain how they know. The past is more present than you think.