When I was a kid I would play a game in the car called Sweet or Sour. It was a pretty simple game. You wave at a stranger in another car. If they wave back, they are sweet. If they don’t wave back, they are sour. You don’t get any points if you get somebody to wave back, and you don’t lose any points if they don’t wave back. We didn’t keep score. Nobody would win and nobody would lose. In retrospect it wasn’t much of a game. I was still good at it though. It’s probably not a game that I will teach my kids. It just conditions kids to be overly friendly and unsuspicious of strangers. It’s like telling them that strangers have the best candy.

Strangers That You Know

The world is filled with strangers that you know. I take the train to get to work almost every day. And so do a lot of other people. And I’ve noticed that I’ve started to recognize a few other passengers. I don’t know their names, I don’t know what they do for a living, but I recognize their face when they get on or off the train. It’s a weird feeling because I want to nod my head to say hello and have to remind myself that I don’t really know them. It’s not just on the train; I see a lot of people in random places that I recognize because they stand out so much. There are two Asian twins that wear matching outfits and carry yoga mats around with them. There’s a homeless lady with an impressive mane of facial hair and a shopping cart that I see all over my neighborhood. I’ll catch a glimpse of somebody that I met at a party for fifteen minutes three years ago. You want to talk to strangers that you know, but you don’t because you don’t want to seem crazy. But is it really? After all, everyone you know was once a stranger to you. 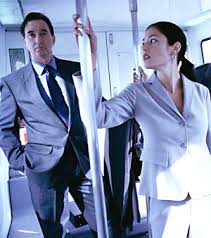 Tagged as familiar, recognize, stranger, strangers, strangers that you know