Knights of Badassdom is 2013 comedy horror film. It stars Ryan Kwanten (best known from True Blood), Steve Zahn, and Peter Dinklage as three best friends with a passion for live action role-playing games. They go on a weekend-long medieval LARP in the woods, but accidently end up summoning a succubus that goes on a murderous rampage. If that sounds awesome, that’s because it is. Any nerd would love it.

This movie was not successful at the box office. It hardly made any money. It only made $123,854 in its initial run. Baby Geniuses 2 made $9,448,644 for comparison. Knights of Badassdom is a much better movie, but it didn’t get any advertising or respect. I only know about it because I saw it on Netflix. I wouldn’t have watched it, but my friend was insistent that I check it out sometime. Today was that sometime. And I was pleasantly surprised at how good it is.

The film has heart. The characters are funny, wacky, and still manage to be relatable. Peter Dinklage’s character is a great example of that. He’s a little person but that has no bearing on the plot whatsoever. There are no midget jokes or offensive sight gags. He’s just one of the main characters and he happens to be short. They don’t talk about it and they don’t exploit it.

There are quite a few actors that you recognize, which is kind of cool considering the lack of budget the film had. That means that Summer Glau, Danny Pudi, and Brian Posehn wanted to do the movie because they wanted to be apart of it. It’s not a great movie, but it’s solid and better than most of the crap you see in theaters today. Add it to your Netflix queue and watch it the next time you can’t decide what to watch. 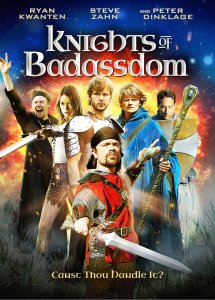 Saving Silverman is a comedy about two friends trying to rescue their friend from a miserable relationship. Steve Zahn and Jack Black play Wayne and J.D. and Jason Biggs plays the titular Darren Silverman. Amanda Peet plays the succubus, Amanda Detmer plays Darren’s long lost love, and R. Lee Ermey plays their old football coach. Dennis Dugan (Big Daddy, Happy Gilmore) is in the director’s chair. It’s a stupid movie about stupid people, but it’s funny and that’s what a comedy should be.

Darren, Wayne, and J.D. are best friends since the fifth grade. They share a common obsession with Neil Diamond and are in a Neil Diamond tribute band. They spend their days drinking beers and hanging out and having fun. That all changes when Darren meets Judith (Amanda Peet). Judith is a controlling, manipulative psychologist who has Darren wrapped around her finger. She can’t stand J.D. and Wayne and forbids Darren from hanging out with them anymore.

Wayne and J.D. want their friend back and decide they have to save Darren at any cost. The best and most logical thing to do is to kidnap Judith and set up Darren with Sandy, his long lost love from high school. The two friends capture Judith and lock her up in their garage, leaving a fake note for Darren saying that she ran away and doesn’t want to marry him. Darren is distraught and misses her, but Wayne convinces him to go out with Sandy. He’s relieved to know that Sandy is preparing to take her final vows to become a nun, and he relaxes around her. They catch up on old times, they share laughs, they have a moment, and sparks fly.

Wayne and J.D. have their hands full with their cunning captive. She outsmarts them and escapes a few times. She analyzes J.D. and makes him realize his homosexuality. While his two best friends are holding his kidnapped fiancée hostage, Darren and Sandy are falling in love. She even decides to leave the convent for him. And Darren is finally happy again.

But of course Judith escapes, Darren goes back to her, Sandy goes back to the convent, and Wayne and J.D. go to jail. Darren and Judith are about to get married and Sandy is about to become a nun, but Wayne and J.D. escape from jail with the help of their old football coach. They save Sandy from her nun vows, then they kidnap Neil Diamond, then they all go to stop the wedding. Darren ends up with Sandy, Judith ends up with Wayne, and J.D. ends up with their old football coach.

This is a stupid movie. But it’s a cult classic now. Jack Black and Steve Zahn have a lot of great moments and quotable lines. They are also eight and ten years older than Jason Biggs. Jason Biggs looked too young to be their friend, he was a little miscast. His role isn’t that important either. Wayne is the main character, he is the one who calls all the shots, he opens the movie, and he’s the one trying to save Silverman.

If you weren’t a Neil Diamond fan going in to this movie, you will be when you come out. Be prepared for that.

That Thing You Do!

Tom Hanks directs this fun movie about the rise and fall of a fictional ‘60s rock band.  A good cast and a soundtrack full of pseudo-sixties hits highlight the film. I imagine the ‘60s were a lot like this, but with way more drugs and hippies.

Tom Everett Scott stars as Guy Patterson, a drummer who joins up with a local group called the Wonders for a talent show gig. He plays the wrong tempo, and their ballad becomes a catchy pop song that takes America by storm. The Wonders get a manager, a recording contract, a new different manager and go on tour. There are lots of parallels to the rise and fall of a little band called the Beatles.

Adam Schlesinger from Fountains of Wayne, known for their song Stacy’s Mom, wrote the title song. It is catchy and gets stuck in your head, but you don’t get annoyed with hearing it fifty times throughout the movie. The majority of the songs heard in the film are written for the movie, but they capture the vibe of the ‘60s music scene.

The movie is fun, lighthearted, and entertaining. The soundtrack is original and nostalgic at the same time. It has a lot of heart and is rewatchable, two important attributes to making a classic movie. A few more years and this will be.