A group of travelers get caught in a storm and seek refuge in a mysterious Inn. They pass the time by telling stories. But since this is a Neil Gaiman story, the travelers come from different times, places, and dimensions, the storm that rages is a reality storm, and the inn itself exists between different realms. I think Neil Gaiman smokes a lot of drugs. 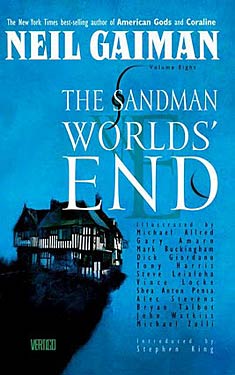 This is the eighth volume of The Sandman, collecting issues #51-#56. Morpheus only makes a few appearances in this volume, the main character is a new guy named Brant Tucker. Brant is driving cross-country when it starts to snow and he gets in an accident. He seeks help at an inn called World’s End. He meets a bunch of other travelers and they regale each other with stories.

There are stories about characters that we already know like the faerie Cluracan and the immortal Hob Gadling. There’s a story about a US President that makes you wonder how an English author knows so much about Americana. There’s a haunting story about a guy who gets caught in the dreams of a city. And there’s another story about people telling stories in a city for the dead. It’s very meta. Neil Gaiman is telling a story about a guy telling a story in a bar about how he heard stories in an inn, and one of those stories had characters telling stories in that story. Get it? Because I understand it and I still don’t get it.

This is one of my favorite volumes of The Sandman. If you’ve thought about reading it but aren’t sure if you want to invest all the time, start here and see if you like it. You can just pick it up and read it and understand what The Sandman is about without reading the entire series. It’s a good entry point. It’s smart. It’s entertaining. And it’s a great story.