Stone Brewing Co. presents Smoked Porter with Chipotle Peppers, a seasonal summer American Porter brewed with real chipotle peppers. It pours a dark brown, nearly black color, with a thick tan head. It has a rich malty aroma with hints of spicy peppers, chocolate, caramel, and smoke. The taste is of roasted malts, smoke, pine, and it starts sweet but then you get a spicy kick from the chipotle. I’ve had pepper infused beers before, but combining chipotle peppers with a smoky porter takes it to a whole new level. The chipotle is subtle yet still lingers on your tongue after each sip. It’s indescribably tasty. It’s has a 5.9% ABV, which is about average for a craft beer. But nothing else is average about this beer. You have to experience it for yourself. Do it. Now. 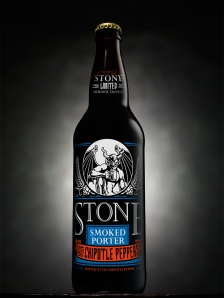