A flyover is one of the coolest things about professional sports in the US. They are usually reserved for special games like Opening Day, playoffs, and championships. You’ll be sitting in the stands listening to a stirring rendition of the Star-Spangled Banner when four jets fly directly over the stadium, right over your head and your patriotism gene kicks into overdrive. The engines scream and the crowd roars and shouts out chants of ‘MURICA! and USA! USA! USA! It’s fricking awesome. Sometimes it’s jets, sometimes it’s helicopters, and sometimes it’s just big ass planes, but it’s always a military commercial. It makes you want to enlist and kill Al-Qaedas. Flyovers are always memorable and will probably be the highlight of your day if your team loses.

The US Navy’s Blue Angels flight demonstration squad is one of the best commercials for joining the military. The 6 F/A-18 Hornets perform dangerous tricks and maneuvers in perfect synchronization at air shows all around the globe These are the best pilots flying the best planes in the world doing the best stunts in the world. They fly in perfect unison 18 inches apart anywhere from 120mph to over 700mph. It’s fucking loud and it’s fucking awesome. 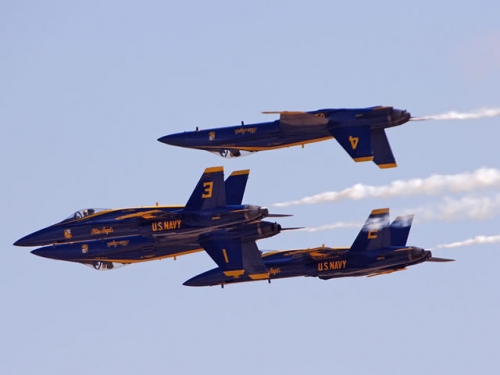 The Blue Angels make you proud to be an American. And not just proud, relieved. Because those are fucking military jets and somewhere in the middle east an F/A-18 Hornet has missiles and machine guns and an enemy in sight. The Blue Angels are the military’s way of saying, “Don’t fuck with me, bro.” It’s intimidation through entertainment. And it’s fucking awesome.