What would you do with a million dollars? Spend the shit out of it, of course. When eleven-year-old Preston Waters (Brian Bonsall) gets a blank check from a shady criminal, he uses the power of technology to write himself a check for a million dollars. Somehow he gets it cashed, and Preston finds out that more money means problems.

Preston is eleven years old and acts a lot older. He knows that he’s being screwed over financially because he is a kid. His two older brothers have a fake business that requires them to take over his room. His dad supports the older brothers because they are trying to make a buck. Preston hates his life and his financial situation and has a wish list for a better life.

Preston’s biggest wish is not for money, but for the death of his two brothers. He openly states to his parents that he wants his brothers to die, and it is later reinforced when you see his typed Birthday Wish List. The number one wish is for his brothers to be taken out. Number two is for a house. We know his priorities off the bat, and he’s obviously evil and sadistic.

One day Preston is riding his bike around a bank and a criminal named Carl Quigley backs into him. The bad guy doesn’t want any extra attention, especially from the police, so he writes Preston a blank check to pay for the damage. Preston takes advantage of the opportunity to commit a little bank fraud and writes out a check for a million dollars. When Preston cashes in the check, the stupid bank manager believes that he’s working for Quigley and gives him a million dollars in dirty money.

Preston now has more money than he can dream of and he goes crazy spending it. He invents a phantom boss named Mr. Macintosh and pretends to be working for him. He buys a mansion, a go-kart track, a faithful chauffeur named Henry, a waterslide, and a bunch of other toys.

He starts to fall for Shay Stanley, who he thinks works at the bank but is actually a federal agent. She is out to capture the mysterious Macintosh for fraud, and thinks that Preston is the way to find him.

Preston has to deal with the pressure of spending a million dollars and has a few bumbling bad guys after his loot and he’s also trying to get some loving from an older woman. 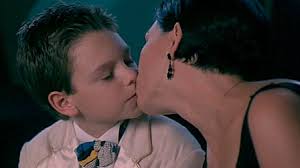 This is not your standard Disney movie and it’s evident within the first five minutes. There’s a hardened criminal who escapes from jail. The dad makes a sex joke about how a computer will teach you everything except how to make love to a woman. The hero of the story is mercilessly mocked and bullied by his older brothers. Preston tells his parents that he wants his brothers to die. He also reinforces that fact by writing it down for his birthday wish list. His number one wish is for his brothers to die. Number two is getting his own house. Throughout the movie, Preston is continually adding to his list and accomplishes most of his goals; the only one that remains is killing his brothers. At least we know what to expect for the sequel.

On the surface, this seems like a movie preaching against being selfish and having too much money. But when you pay attention you realize that money makes things better. The movie tries to make a point that Preston has all this money and toys and no one to have fun with. But then you remember that when he was poor, he didn’t have any friends and was picked on. His friends bashed him. His brothers would tease him and physically beat on him. At least when he had money, he also got a little respect.

This movie is more relevant today than it was when it came out. It’s definitely dated and a lot of the things that he buys are laughable. But if you were a kid and got a million dollars you would spend it in stupid ways too. Especially in the ‘90s.