Alan Moore’s Watchmen is regarded by many to be the best graphic novel of all time. Zack Snyder’s big screen adaptation is a valiant effort to capture the magic of the comic on film but the end result is somewhat disappointing. The comic is a perfect comic. The film is flawed and you’re a fool if you think its anywhere close to perfect.

It could have been worse though. It’s obvious that Zack Snyder respects the source material. He uses lines and scenes taken directly from the book. The whole first half of the movie is just like the comic. Then it starts deviating from it. And you realize there is no master plan involving kidnapped scientists and artists. So they had to change the ending. And fans don’t like it when you change the iconic ending to an iconic story.

Another problem with the movie is that they spend all the time establishing the main characters and ignoring the minor characters like the citizens of New York. So when NYC blows up and millions of people die, you don’t care because you didn’t know any of them. The director’s cut gives the Bernards a little more screen time, but if you only saw Watchmen in theaters you only catch a few glimpses of them.

The casting is pretty solid. Jackie Earle Haley steals the show as Rorschach. Jeffrey Dean Morgan does a great job as the Comedian, and it’s hard to play a character that you mostly get to know through flashbacks. Patrick Wilson does a good job as Nite Owl. Malin Åkerman plays a decent Silk Spectre II and you get to see her boobies (always a good thing). I don’t know about Billy Crudup as Dr. Manhattan. His delivery is too distant and monotonous and the blue CG wang is distracting.

Some of the actors are miscast. Carla Gugino can’t pull off playing the aging Silk Spectre, and even though she’s pretty to look at, it’s not enough to hide the fact that she can’t act. The worst decision was hiring Matthew Goode to play Ozymandias. In the comic Ozymandias is a super strong athletic gymnast with an intellect off the charts. Matthew Goode can play smart well. But he’s not physically intimidating. He looks skinny and sickly like he’s recovering from chemo.

If you liked the comic, you’ll probably enjoy the movie. If you never read the comic, I doubt you would know what the fuck is going on. It’s a really dense story and the movie tries to cram twelve issues of the comic into a few hours of screen time. Shit is going to be left out, cut out, or butchered. The movie will suffer as a result. It’s not a bad movie. It’s loud. It looks cool. There’s fighting and nudity and masked vigilantes. But it’s not the comic.

There are quite a few movies based on comic books, but Sin City takes it to a new level. It is a comic, but they used actors and Hollywood effects instead of paper to tell the story. Robert Rodriquez and Frank Miller co-directed this film translation of Miller’s Sin City and convert the comic into a cinematic masterpiece. This movie has it all: violence, nudity, honest cops, corrupt cops, hitmen, hitwomen, prostitutes, criminals, clergymen, and pedophiles. You probably wouldn’t want to watch it with your mom.

The movie starts with a mysterious lady (Marley Shelton) on a balcony overlooking the city skyline. She’s approached by a smooth-talking guy (Josh Hartnett), and they have a casually nuanced conversation, which ends with the guy shooting her. It turns out that he was a hitman and it’s implied that she hired him to kill herself. It was an indirect suicide. Welcome to Sin City.

The next story is about a cop on the verge of retirement trying to solve one last case. Hartigan (Bruce Willis), is pushing sixty and has a bum ticker, but he’s not gonna let a little heart problem stop him from rescuing the kidnapped Nancy Callahan. Nick Stahl plays the pedophilic perpetrator. He is a member of the powerful Roark family, and his corrupt senator father keeps the cops off his back. That doesn’t stop Hartigan from going after him and shooting his dick off. Hartigan almost dies, but Nancy lives. He reasons that it’s a fair trade. 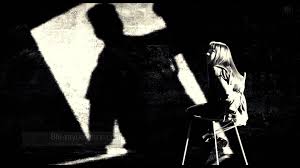 The film jumps over to tell Marv’s tale next. Marv (Mickey Rourke) is a brute, a beast, a gladiator, and ugly as hell. A beautiful and sexy whore named Blondie (Jaime King) is in trouble and sleeps with Marv for protection. He wakes up to find her dead, and he is framed for her murder. He has to find out who killed Goldie and why. He begins following the trail and finds out that Cardinal Roark is involved. The Roark family sure gets around. Suffice to say, Marv kills a lot of people and avenges Goldie’s death.

Clive Owen headlines the next segment. He plays Dwight, a do-gooder who gets himself involved in a war between the Old Town prostitutes and the mob. Jackie Boy (Benicio del Toro) hits Brittany Murphy and makes her cry. Dwight decides he doesn’t like that and he doesn’t like Jackie Boy. So he follows him to make sure that he doesn’t hit any more girls. Jackie Boy goes to Old Town where the prostitutes are and pulls out a gun when his charms don’t get a girl into his car. The prostitutes kill Jackie Boy and then they find out that he’s a cop. The prostitutes freak out because a dead cop means that the truce between the cops and whores would end and then the mob could wage war for Old Town. Dwight has to get rid of the body before that happens. And he does.

Next we return to check in on Hartigan. It’s about eight years later and Hartigan has been stuck in jail, framed for kidnapping and raping Nancy Callahan. He finally gets out and goes to make sure that Nancy is safe. Not only is she safe, she’s Jessica Alba now, and she’s a stripper, and she’s totally in love with him. The only downside is that Roark Junior is back, and so is his dick, and now he’s yellow and smells like shit. This time Hartigan might be too old to stop him. He’s not though, and he kills that yellow bastard and saves Nancy’s life again. Then he shoots himself in the head so no more Roarks will go after Nancy. He dies, but Nancy lives. He reasons that it’s a fair trade.

The last part of the movie deals with Alexis Bledel’s character getting shot by Josh Hartnett’s hitman. The movie comes full circle and you are anxious for the sequel. It should come out in 2013. That’s been way too long.

Sin City is the ultimate comic book movie. It is one of the first films that depicts truly and tastefully what a comic book translation is capable of. This isn’t a movie, it is a comic come to life.