42 is a 2013 biopic about Jackie Robinson. It was written and directed by Brian Helgeland, and it stars Chadwick Boseman as Jackie Robinson and Harrison Ford as Branch Rickey. The film focuses primarily on Robinson breaking the color barrier in Major League Baseball. The film starts with Branch Rickey, the President and GM of the Brooklyn Dodgers, making the bold decision to bring a black player to the major leagues. He only has to find the right one, someone with talent, skill, and the ability to take abuse without fighting back. He finds what he’s looking for in a young player named Jackie Robinson.

Jackie must endure racism and prejudice from his own teammates, other teams, managers, fans, and the media on his path to breaking the color barrier. He experiences things what would make anybody break but he handles it all with grace and class, keeping his mouth shut and letting his bat do the talking. And all the way he inspires people. He changes people. He changes the world. And he does it playing baseball.

Chadwick Boseman does a serviceable job playing the legendary Jackie Robinson. He doesn’t stand out but he doesn’t take anything away. I couldn’t name an actor that could do it better off the top of my head, but nothing about his portrayal really grips you. Harrison Ford is a scene-stealer as always. He growls and chews his way through his lines. Alan Tudyk’s brief appearance as Ben Chapman, the racist manager of the Philadelphia Phillies, also deserves recognition. 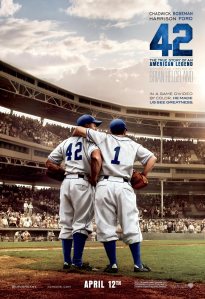 42 is not a perfect film. It’s not a hundred percent accurate and they take some liberties in telling the story. That’s to be expected. It’s a Hollywood biopic, not a documentary. Jackie disappears during a few parts of the movie and it becomes The Branch Rickey Story far too often. Yeah, Branch Rickey played a huge part in racial integration but I wanted to see a movie about Jackie Robinson, not another flick about a rich white guy. There’s also an unnecessary scene involving homoerotic showering that left me scratching my head. Jackie’s teammate seems way too interested in seeing Jackie naked. Like way too interested. I also wish that they showed more things from Jackie’s career like other black players entering the game and when he was finally tenured enough to be able to fight back.

It’s still a good movie. I would recommend it. The good outweighs the bad and it’s important to recognize and honor Jackie Robinson. The movie depicts him in a positive light and you’ll respect him more after you watch it. But this film only gives you a glimpse of his life and he did a lot of great things that aren’t included in the two-hour running time. I want more. I demand a sequel.