Police Squad! was a 1983 TV comedy series starring Leslie Nielsen as Detective Frank Drebin. It only lasted six episodes before it was cancelled, but it become a cult classic and also spawned the Naked Gun film trilogy. Police Squad! is a comedy in every sense of the word. It works because of Leslie Nielsen’s deadpan delivery, even during the midst of the absolute absurd. David Zucker, Jerry Zucker, and Jim Abrahams created this show, which is a good sign, because they are the comedic masterminds behind Airplane! If you’re a fan of Airplane!, you’re a fan of this show. 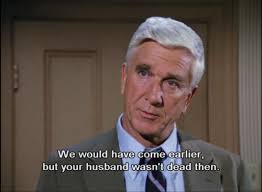 The Naked Gun movies and Police Squad are very similar. The movies reuse a lot of the same jokes, and they both have the same style of humor. Some of the same characters show up in both, but they casted a few different actors. For instance, Alan North and Peter Lupus played Captain Ed Hocken and Officer Nordberg in the show, but they were replaced by George Kennedy and O.J. Simpson in the films.

This show was ahead of its time. It was too smart for TV. Audiences didn’t know how to respond to it, and the network didn’t know how to advertise it. So it got cancelled. I will never understand how shows like Police Squad!, Firefly, and Freaks and Geeks get cancelled during the first season, but Jersey Shore gets a six-season runtime.