Watching TV With Subtitles On

My roommate has the unfortunate habit of watching TV with subtitles on. He always turns on closed captioning whenever he watches a movie or television show. He says it makes it easier to pay attention. I wholeheartedly disagree. Why would you watch an epic Marvel movie in high definition and turn on subtitles? A constant text scroll distracts the eye from the amazing visuals and special effects. I want to watch what’s happening, not read what I’m hearing.

He says that it’s normal. It’s not. That’s why you don’t see closed captioning in movie theaters. That’s why you have to go into the settings and manually activate it. It would come on automatically if the majority of people preferred it. But he insists on turning it on whenever we watch something. And inevitably halfway through the movie he stops watching. He’ll start playing on his phone or leave the room to lay down in his bed, leaving me to suffer through the unnecessary subtitles that he insisted he needed. 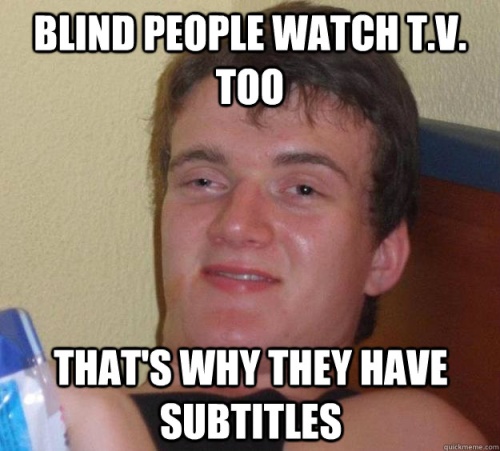