My girlfriend likes to play party games like Heads Up! and Cards Against Humanity. I guess she likes having fun and socializing with friends and family. So I bought her a game called Joking Hazard and we invited some friends over to play. I had never heard of it before I stumbled upon it in Target but I think that it has the potential to rival Cards Against Humanity as the next great party game. It’s simple to learn. There’s a stack of cards with offensive cartoon panels. Everyone gets dealt seven cards. Each person takes turns being the judge. The judge flips a random card over from the deck, then plays one of his cards create a setup, and then everyone else plays one of their cards as the punchline. The judge chooses their favorite and that person gets a point. You play until someone wins. Offensive cartoons + friends (+ alcohol) = a great time. We played a few other party games that night, but Joking Hazard was my favorite. I might be biased because I bought it, but I know a good thing when I see it and Joking Hazard is a good thing. 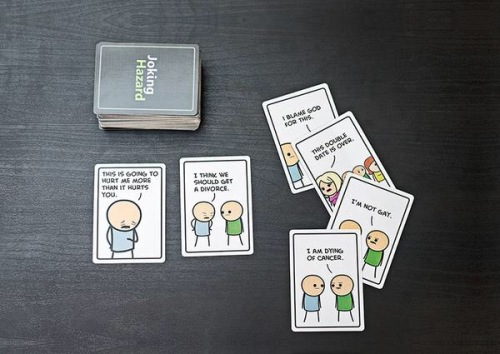