I was seeing a girl for a few weeks until we ended it last week. She was being cold and distant, so I called her out on it and asked what her deal was. Did she want to be with me or not? She said no. She didn’t want a relationship, that she just wanted to be friends. I said no. I have enough friends. I wanted something more. She didn’t. So we broke up. A few days later she texted me and asked if we were going to still talk and hang out. I told her no. I don’t know how to be her friend. We were never friends. We met, we hooked up, and we hung out a few times. I was never in the friendzone, and I especially don’t want to be there after we aren’t together anymore. I don’t think that’s selfish. I think that’s realistic. I don’t understand how or why she would want to be friends after such a volatile relationship. Being friends doesn’t spare my feelings from breaking up. It still hurts. It still sucks. Being her friend won’t make me feel better. Being my friend won’t make her feel better. I won’t ignore her, I can’t ignore her. But I definitely don’t want to be her friend. A friend should be someone that you want to hang out with but not put your penis in. That’s blunt but true. 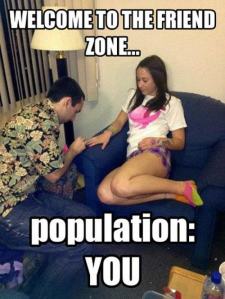