There used to be a time when people would relax at home by watching TV. That time has passed. Now we relax at home by watching Netflix. It’s so much better than TV. It streams instantly, there are no commercials, and you can binge-watch an entire season at once. Netflix has tons of shows, movies, documentaries, and original content. Most people would say goodbye to cable forever if Netflix had a sports package. I’m already ahead of the trend. I stopped paying for cable a few years ago. It wasn’t that much of a change. It sucks not being up to date on current shows like The Walking Dead, but I know that it will come out on Netflix eventually. I miss watching sports, but I’m primarily a baseball fan so I’ll throw on the radio and watch the MLB Gamecast, or I’ll catch it at the bar, or I’ll mosey on down to the ballpark and see it in person. I don’t miss cable. Netflix is easier, cheaper, and more convenient. I can watch it on my phone, iPad, or laptop any time and any place. Netflix is taking over the world for a reason, and it’s DiGiornofied the way we talk. It’s not delivery, it’s DiGiorno. I’m not watching TV, I’m watching Netflix. 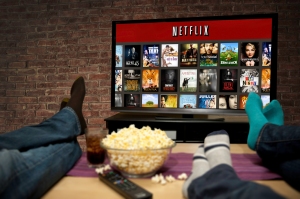