Some things just can’t stay dead and quality programming is one of them. Bender’s Big Score is the direct-to-video film that brought Futurama back to life. It serves as both a movie and as the first four episodes of Futurama’s fifth season. Let’s do a brief recap of the show’s history: Futurama first premiered on March 28, 1999 and aired its last episode on August 10, 2003. FOX treated the show like shit and constantly changed its timeslot around. They sabotaged the ratings so they would have a reason to cancel it. They did, but Cartoon Network’s Adult Swim picked it up and aired in in syndication for a couple of years. It became a cult classic and Comedy Central bought the rights and decided to bring it back with all new episodes. Bender’s Big Score was the Futurama reunion we were all waiting for.

Matt Groening and company reunited the writers, animators, and voice cast to bring us this funny and smart feature-length story. It’s sci-fi gold. You can geek out on it and laugh hysterically at the same time. It’s about time travel and paradoxes and true love. They brought back most of the characters that you were missing and they pay homage to previous jokes while cracking new ones. I don’t even want to waste my time talking about the plot. It’s too complex and witty. I’ll just compare it to Inception because it’s the kind of movie that you need to watch multiple times so you can fully grasp what is happening. It’s funny and smart and a worthy start to a new era of Futurama. 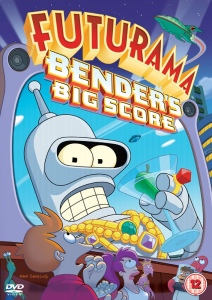