Oz is an HBO series created by Tom Fontana about life behind bars at the fictional Oswald State Penitentiary. It ran for six seasons from 1997 to 2003. It was a milestone in television history. It was the first hour-long HBO drama series, and opened the doors for The Sopranos, Deadwood, Game of Thrones, etc. Season 1 introduces you to the major players in Emerald City, a special unit of the prison, which was created to rehabilitate and not simply punish prisoners.

Emerald City is controlled by the staff of Oz, but the inmates run the show. Each episode is narrated by paralyzed inmate Augustus Hill (Harold Perrineau). He talks about the themes and issues of each episode, and he is often neutral and the voice of reason in a chaotic place. The stability of Emerald City is rocked by the arrival of Kareem Saïd, a devout Muslim and political activist who immediately assumes a position of power amongst the inmates. He becomes the unofficial leader of the inmates, and that causes some rival inmates to forge an unsteady alliance. There is an awful lot of politicking and shady deals between the Mafia, the Aryan Brotherhood, the Homeboys, the Irish, the Bikers, the outcasts, and the Muslims as each group attempts to gain more power and control.

New inmate Tobias Beecher (Lee Tergesen) is perhaps the most relatable character on the show. He was a successful lawyer that was convicted of a DUI and sent to a maximum security prison. He has no street skills and doesn’t know how to handle life in prison. Consequently he ends up being the property of Vernon Schillinger (J.K. Simmons), leader of the Aryan Brotherhood. Beecher becomes a bitch. And you don’t want to be a bitch in Oz. Beecher must adapt or die, and he slowly grows a pair of balls and transforms himself into a badass.

Season 1 is all about struggle. The inmates struggle for power and respect. The staff struggles to keep control. Everyone struggles for survival. Oz is a realistic show. It almost feels like you are watching a documentary. It makes you grateful that you aren’t behind bars. It makes you relieved that you don’t work at a prison. But it’s relatable. There are a few characters that you see yourself in. It scares you a little bit, but it compels you to keep watching more. Oz is a few years old now, but it’s still relevant. Good storytelling never goes out of style. 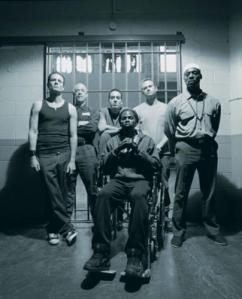