I don’t really feel bad for Jon Stewart. Not really. He’s rich, respected, famous, funny, smart, and successful. He took over as host of the The Daily Show after Craig Kilborn left, and more importantly, he made that show his own. He gave it a new direction, a new voice, and America took notice. He won Emmys. He wrote best-selling books. And he let other comedians get an opportunity to be seen on his show. Steve Carell and Stephen Colbert come to mind. They both had segments on The Daily Show that led to careers in film and TV that surpass Stewart’s own career. Steve Carell got the lead in NBC’s hit show The Office, and network shows mean huge paychecks. He also became a hit on the big screen with The 40-Year-Old Virgin and Anchorman. Stephen Colbert became Stephen Colbert, and got his own show right after The Daily Show. He became even more popular and influential, and now he’s going to replace David Letterman when he retires.  And Jon Stewart can only grit his teeth, pretend to smile, and ignore the fact that he launched their careers while he remains on basic cable. Even John Oliver has a show on HBO now. That’s premium cable. Premium. Jon Stewart is far more accomplished than I could ever hope to be, but he has to be jealous of the Stevphens. 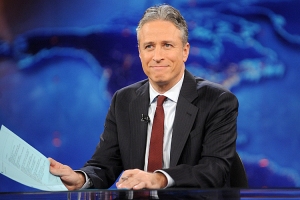