Knowing All the Words to a Song

You’re in the middle of a crazy party or going nuts at the club when the song cuts out and the DJ puts on a new track. The lyrics kick in after a few familiar bars and everyone roars with approval and they all start singing along. You join in, belting out all the words with everyone else and the music becomes bigger and louder and more intense. Everyone becomes connected and you’re transcended to another level. Music is an escape, a drug, and nothing gets you higher than when everybody is on the same level as you. Knowing all the words to a song in a key part of that. It means that you know the song. It means that it has meaning to you. And you have a bond with all the other people that appreciate the song as much as you do. Certain songs bring people together. “Bohemian Rhapsody” is an amazing song to listen to, but it’s so much better when you sing along to it with a bunch of friends (especially if you bob your head appropriately).

It’s surprising how many songs you actually know all the lyrics too.  You probably couldn’t sing all the words to a particular song if I told you to sing it a cappella, but you could do it if you heard the song playing. It’s easier to sing along to a song than it is to memorize one. You might not get all the words perfectly, but it’s still good enough to do karaoke. 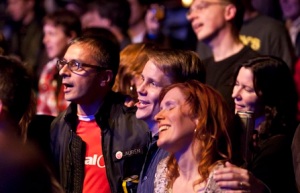 Tagged as knowing all the words to a song, lyrics, music, sing, song