The Las Vegas Cowboy is a famous neon sign of a gigantic winking cowboy. If you’ve seen any movies about Vegas from the ’80s or ’90s, you should know exactly what I’m talking about. It’s a famous landmark, not quite as glamorous as the Statue of Liberty, but it’s still memorable and worth checking out. He’s called Vegas Vic, and he’s been the unofficial mascot of Las Vegas since 1951. I’ve been to Vegas a few times. I went in 2006 and didn’t get around to seeing it. I went again in 2013 and still didn’t see it. But I finally saw it last night. It wasn’t as impressive as I thought it would be, but at least I can finally cross it off my bucket list. I took a picture of it. You can see it below. If you ever go to Vegas, you should check it out. Just remember that it’s on Fremont Street a.k.a Old Vegas, not on the Strip where everybody goes now. Don’t go out of your way to see it, but see it if you can.
Critically Rated at 13/17
Written, Rated, and Reviewed by Brendan H. Young 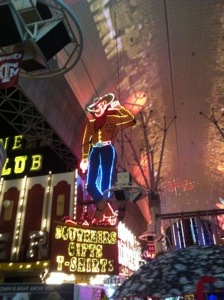